Book Review: One Down, Diana Wilkinson 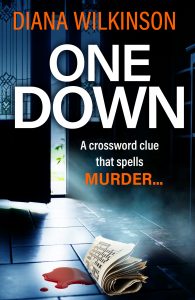 Thriller: One Down, Diana Wilkinson

Amanda is separated from her husband, Nathan. She is a recovering alcoholic, finally moved to work toward sobriety after being involved in a tragic accident related to her drinking. Despite her finally moving toward Nathan’s desire for her to stop drinking, the marriage fails after another incident he blames her for and there does not seem to be any hope for reconciliation.

Nathan sets cryptic crosswords for a newspaper. Cryptic crosswords are a very specific type of crossword puzzle, requiring a very different set of logical skills than a standard crossword. Cryptics blend two clues together, requiring the solver to determine which part of the clue is which. One example found in the book is a clue Nathan created for Amanda early in their relationship: A male attorney for the girl. The word “girl” is one piece of the clue: the answer is a girl’s name. The other part involves word play. “A” is (in this clue) just the first part of the word. “Male” is the second, referring to “man.” And in the US, a “DA” stands for “district attorney,” a prosecutor for the government during a trial. A-Man-DA, i.e. Amanda.

During their relationship, Nathan got Amanda hooked on solving the daily crosswords. Even after their split, she continues to work on this hobby. However, the clues and the solutions begin to feel very personal. Almost as if they were targeted toward her. Most people would see “silver birch” as simply a tree. It is that. It is also the name of the apartment she lives in. “Florida” is a state in the US that was also a place Amanda dreamt of visiting one day. “Manhattan” is an island borough of NYC. It is also the name of Amanda’s favorite cocktail. And when A male attorney for the girl appears in a puzzle she is absolutely certain that Nathan is setting puzzles to cause her pain.

But is he? Other members of the crossword team have been affected by Amanda’s drinking. She is not even sure she can trust the handsome neighbor who has sparked a new fire in her heart. And the clues are vague and quite solvable by any puzzle fanatic, published in a paper available to everyone. Is it possible that someone would hide threats in plain sight? Is it possible that she is just going crazy?

Diana Wilkinson has brought together two things I love: crossword puzzles and psychological thrillers. The result is a very creative and eerie book, where the real puzzle is what the threat to Amanda is. Is it from her ex? Is it from a neighbor? Is it from someone else? Or is it from her own mind? Like any good cryptic, the answers are hidden in the text itself. 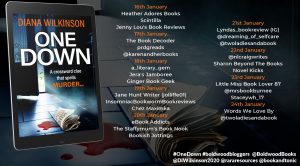 Our thanks to Rachel Gilbey of Rachel’s Random Resources for our copy of One Down, provided so we could review it as part of a blog tour. The opinions here are solely those of Scintilla. For other perspectives on this novel, check out the other bloggers on the tour.

Book Review: One Down, Diana Wilkinson