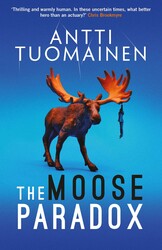 Sequel to The Rabbit Factor

The Moose Paradox, by Antti Tuomainen, is a droll adventure about the hero we all need: an insurance actuary who has inherited an adventure park (NOT to be confused with an amusement park) when his brother died.

By the end of The Rabbit Factor, Henri Koskinen is seeing his life come together nicely. The people trying to hold him accountable for his brother’s debts are either dead or in jail. The staff is flourishing under his unorthodox leadership. He is sort of at the beginning of a relationship with Laura and is hoping she feels the same way about him. Indeed, everything is good.

Until it isn’t. Sometimes the dead are not as dead as you might think. A trio of criminals has taken over YouFunMe’s main supplier and they are refusing to sell the “Moose Chute” to the park, an attraction the park desperately needs to compete. The staff begins to change, making demands of Henri that cannot be met financially. He’s a mathematician. He would know. An investor with inside knowledge of the park is eager to buy and is not used to hearing the word “No.” And things get complicated with Laura just as his orderly and predictable life begins to fray.

Then a dogged police inspector shows up just to make things interesting.

Henri Koskinen is brilliant at math. He can easily do calculations in his head that for most of us would require an actual calculator. People, though, are much more complicated than math. You would think that they would act logically, reasonably, influenced only by the facts. You would be mistaken in that. And as Henri stumbles his way from one challenge to the next, we see him begin to get the calculus of connectivity. People are not as easy (for Henri) as math, but they just might be worth it.

Especially if he can just get that Moose Chute!

Antti Tuomainen is a delightful writer with a wickedly dry sense of humor. Henri basically recognizes his own weaknesses. He also recognizes that one of his weaknesses is an inability to figure out how to address those weaknesses. What he does not recognize are his own strengths beyond math. He has a strong adherence to a firm moral code. He is loyal, brave, and deeply committed to the people around him. He feels a strong sense of responsibility to the park, its employees, and the people who love it. And if his mathematical precision and acumen makes him a bit weird, well, Tuomainen surrounds him with characters who are just as odd in their own ways as Henri.

David Hackston captures the humor and wisdom of Henri and the rest of the characters with delight and flair. Tuomainen has been described as the funniest writer in Europe. Hackston brings both talent and artistry to his translation, capturing the wry humor, translating the unique cultural aspects unfamiliar to English speakers, and giving us access to a truly special author.

Unlike many mysteries, Tuomainen’s work is entirely character based. Henri is not a detective. His procedure has nothing to do with the police. Far too often he discovers who the bad guys are as they are attacking him. His growth, though, as a person, as a lover, as a manager, as a friend, gives him the tools he needs to restore his world to its rightful direction.

Our thanks to Anne Cater of Random Things for our copy of The Moose Paradox, provided so we could be part of this blog tour. The opinions here are solely those of Scintilla. For other perspectives, check out the other bloggers on this tour.