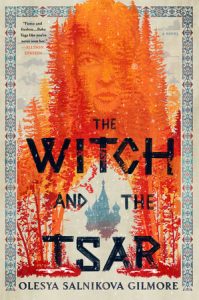 The last few years have brought some exceptional novels taking the stories of notorious “witches” from folklore and reinventing those stories in new and exciting ways. Madeline Miller’s Circe and Vaishnavi Patel’s Kaikeyi. Joining that elite company is a new, debut novel from Olesya Salnikova Gilmore: The Witch and the Tsar.

Reimagining the folklore of the Baba Yaga, Gilmore quickly casts aside the current understanding of this character in favor of some older and more obscure sources. In her telling, Yaga is not a gnarled hag flying in her mortar to steal babies and take them home to eat. As the author puts it, most of those stories were written by male Christians who may have had their own reasons to disparage a powerful, magical female heroine from Russia’s pagan stories. Rather, this Yaga is an immortal, the daughter of a goddess, hundreds of years old but still appearing as a relatively young woman. Far from eating babies or flying in a mortar, she is a healer of minds, hearts, and bodies. She rides a wolf, does not fill her hut with her body to terrify children, and for centuries has been mostly welcomed by the villages of Russia.

Admittedly, her hut does walk on chicken legs, which can be a bit unsettling at first sight.

Things are changing, though. As Christianity becomes more prominent, essentially the law of the land, worship of the old gods is ending and acceptance of the old ways is diminishing. Yaga is no longer certain of her place in a changing world and is considering disappearing into the woods far from the haunts of mortals.

A visit from a dear old friend changes her mind. Anastasia used to come with her mother to visit Yaga, and Yaga became very fond of the young woman. Anastasia grew to be a graceful and gracious young woman who caught the eye of the tsar. Their marriage captured the hearts of their people, who loved the young tsaritsa as much as she loved them.

Yaga can hardly believe her eyes, though. Anastasia is pale, thin, suffering terribly from an illness that none of the capital’s doctors can diagnose or heal. In desperation she has turned to her childhood friend. Yaga quickly realizes Anastasia has been poisoned, and though her magic can remove the poison it cannot protect the tsaritsa from being poisoned again. Reluctantly, Yaga decides to go to Moscow and try to find the poisoner.

Like any good detective, Yaga suspects the husband may be involved. She quickly realizes, though, that Tsar Ivan adores his wife and appreciates her taming effect on his darker impulses. Ivan welcomes Yaga to the Kremlin, very appreciative of her healing Anastasia, and makes Yaga a trusted confidante. Still, there is a darkness, a madness, lying in wait in Ivan’s character. Should he lose his wife, the restraint of her character on his madness would also be lost and that darkness would likely change his direction irrevocably.

Hopefully it is not too much of a spoiler to remind readers of the name history has given to Anastasia’s husband: Ivan the Terrible.

Yaga’s story moves from the Kremlin to the taiga of northern Russia then to cities remembered for the horrors visited upon them: the slaughter of Novgorod and the siege of Pskov. Throughout her story, Yaga’s love for her people and her country combined with her magic and her longevity make her a central figure in the fight to save Russia from outsiders, from itself, and from the very gods it once worshiped.

Gilmore not only reimagines the story of this magical figure. She reinvigorates it, bringing it from the shadows of a dark Russian tale to the light of a powerful mythical heroine. Baba Yaga may be a name that instills fear into naughty children. Perhaps it may now also be a name that gives inspiration to people who think all is lost.

Our thanks to Anne Cater of Random Things for our copy of The Witch and the Tsar, provided so we could give an honest review. The opinions here are solely those of Scintilla. For other perspectives, check out the other bloggers on this tour.

One thought on “Book Review: The Witch and the Tsar, Olesya Salnikova Gilmore”