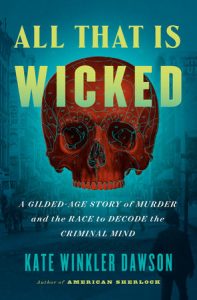 Edward Rulloff might have been a genius. A gifted linguist, he largely taught himself Latin and Greek. Languages were easy for him. Eager to make his name among the intelligentsia, Rulloff wrote a bold and audacious work speculating on the origins of all languages. The treatise was controversial. Some hailed it as a transformative work of independent scholarship. Others saw it as the uninformed rantings of an uneducated amateur. Regardless, it was indeed a work of a lifetime, consuming much of Rulloff’s attention and energy for decades.

Less controversial was how he funded his obsession. Less controversial in that it was universally condemned. Rulloff was a thief and a murderer. He was arguably a serial killer with at least five murders attributed to him (arguably seven), including his wife, his sister-in-law, his infant niece, and his own infant daughter. None of those deaths could be definitively tied to him. Indeed, his wife and daughter disappeared completely and their bodies were never found. Late in life he admitted to killing his wife though he claimed it was an accident, but by then he was already facing the gallows for another murder, one that had been proven to be his handiwork.

Rulloff’s crimes were committed in the middle of the 19th Century. It’s quite possible that his mystique would have ended shortly after his life did, except for two things. First, Rulloff became the center of a debate which certainly had more than a little elitism and white-supremecy contributing. The question: Should a genius (specifically a white genius) be executed at the potential cost of losing his contributions to the world? Second, because of this interest in Rulloff’s brain, after his execution his head was removed, his skull sawn open, and the brain donated to Cornell University for study where it remains suspended in a formaldehyde-filled jar (albeit now in less than pristine condition).

Kate Winkler Dawson looks at the awful “career” of Edward Rulloff through very deep and thorough research. She has read books and letters from the time, listened to the stories of the descendants of the family most deeply touched by Rulloff’s psychopathy, spoken to contemporary experts about multiple aspects of the matters. Dawson’s work shows her meticulous research, but is often presented more in the fashion of a novel than a dissertation. She creates conversations that “might” have happened, tells how he “might” have poisoned his sister-in-law and her baby, how he “might” have disposed of his wife’s and daughter’s bodies, how he “might” have killed his co-conspirators on the same night as the murder which finally led to his conviction. That is not to discredit or diminish her scholarship; indeed it may shine through more brightly using this technique than it would have otherwise. It definitely makes the material accessible to those with a fascination with true crime.

Her passion for the subject also shows in her examination of the debate surrounding Rulloff’s ultimate death. Can a just society accept criminal behavior, including murder, if the criminal is also a genius? Does the potential for contributing to society outweigh the debt owed to that same society because of his crimes? Dawson does not dive into the complex issues surrounding capital punishment in general: there was almost no debate about the rightness of this ultimate punishment at the time. What she does, though, is raise questions not only about whether Rulloff’s genius should have given him a pass for the murders, but also about whether those who raised these questions would have had similar reluctance were Rulloff black or Native American, and would there have been a different result if Rulloff’s background had been one of wealth, privilege, and education. Rulloff’s crimes and punishment raise questions of race and class which continue to bedevil American jurisprudence today.

Our thanks to Anne Cater of Random Things for our copy of All That Is Wicked, provided for our participation in this blog tour. The opinions here are solely those of Scintilla. For more opinions on this non-fiction book check out the other bloggers on this tour.