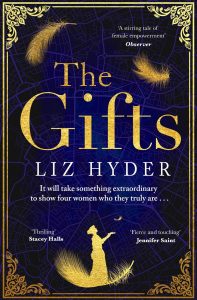 Victorian London was very different from our world. Sewage running through the streets. Surgery without anesthetic. Women locked into strictly prescribed roles. Wings bursting out from random people. Definitely not the sort of world we live in.

Etta, the daughter of a white father and a black Jamaican former slave, now lives in a small cottage near her father’s English home. Rather, it was her father’s home until he died. Now it is owned by her half-brother, the heir to their father, and he very grudgingly allows Etta to remain in a small rundown cottage as far from the house as is possible while still being on the property. Etta’s only companion is her dog Scout.

Natalya is going to London to join her cousin who has told her a wonderful future is theirs for the taking. She has worked as a nanny for a while to earn money for the trip. Finally it is time to leave.

Mary is a young woman trying to make a living by selling handmade buttons and finishing articles started by her Uncle Jos, who took her in and cared for her after her parents died. Having lost his “bachelor roommate” recently, he has drowned his sorrows in alcohol and cannot keep his focus long enough to finish the articles he is charged with writing. Mary is able to mimic his style of writing and submits the articles as his. After all, there’s no such thing as a female journalist.

Edward Meake is a young ambitious surgeon. He and his wife Annie live in a house that would be ideal for a family. Unfortunately, despite their best efforts, no children have been born. Edward is treating a prostitute near the docks (at the request of a wealthy patron rather than through any compassion of his own) when he hears an extraordinary story: a fisherman has pulled a body from the Thames. That itself is not unusual…but this body has wings.

Jumping back and forth between these characters, Liz Hyder pulls her readers into a plot that builds in tension and conflict to the breaking point. The characters mix and match, intersect and separate, each touch adding new wrinkles to the process. This is one of the least predictable stories I have read in some time. By that I mean that many books at least hint toward the direction they are going. Although the details may wait for revelation, I can usually say that by the end of the book x or y and z will happen to the protagonist. Perhaps because of the number of perspectives, perhaps because the direction changes every time one character bounces off another, I was honestly delighted and surprised chapter after chapter.

Hyder also does a wonderful job of keeping Victorian sensibilities with more modern attitudes still in view. Jos and George were “bachelor roommates.” Annie has a medical exam while remaining fully clothed and untouched by the doctor. Characters that fall in love do not kiss until the man has proposed. They certainly do not do more than kiss until they are married. Hyder does not break the fourth wall, but I often felt like the author was looking at us and winking: “bachelor roommates? Right!”

I loved this book and am now a huge fan of this author. I hope to read much more from her.

Our thanks to Anne Cater of Random Things for our copy of The Gifts, provided so we could take part in this blog tour. The opinions here are solely those of Scintilla. For other perspectives on this novel, check out the other bloggers on this tour.