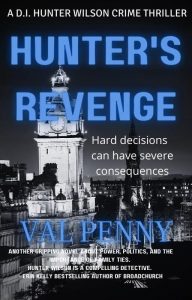 George Reinbold was a retired crime scene investigator from the Edinburgh police force. His passion, though, was books. Children’s books. An avid collector, he could often be found at auctions, estate sales, rare book dealers, and other places where a treasure might hide. When the opportunity arose to purchase a first edition of Winnie the Pooh, signed by A.A. Milne and the illustrator, he leaped at the chance to have it delivered to his home.

What was delivered instead was a bullet to his brain.

DI Hunter Wilson considered Reinbold to be a friend. This death is personal. Unlike so many (usually American) shows, though, Hunter’s Revenge is not about seeking personal retribution against the criminal. Wilson wants his revenge to come through the law, building his case brick by brick until the murderer is locked away for the rest of his or her life.

Reinbold, though, has a secret history. As a teenager in East Germany, he accidentally killed a Stasi officer. His family insisted that he flee, knowing that his life would be forfeit were he captured. Reinbold escaped and made his way to Scotland. His family paid a terrible price for his crime.

So…was Reinbold killed because of his past transgressions? Was he killed because of a more recent conflict, having upset someone through his work with the police? Was it a coincidence that two Germans were visiting Edinburgh at the time of his death–two Germans who both had connections with Reinbold’s past? Most police do not believe in coincidences. Crime writers do not seem to favor them, either.

Val Penny is one of those authors who just becomes more delightful with each book of hers that you read. The officers she created are smart, committed, and decent human beings. They are not perfect, but they are not the broken shells wearing their wounds on their lapels that so many crime writers seem to favor. One is married with five children (and a sixth on the way). Two are dating each other. Another couple on the force celebrates their wedding in the novel. Hunter cares for his people, respects the citizens of Edinburgh, and tries to do the right thing.

A pet peeve of mine actually is that many authors seem to believe that decent and ordinary people are uninteresting. Penny proves that is far from right. Her characters are rich, deep, finding their challenges more in figuring out the right way to do things rather than trying to make amends for their wicked pasts. Even those who skirt the edge of the law are complex, not always evil so much as misguided. These are people whose strength comes from their character. I would love to grab a pint with any of them at the pub of their choosing–though I’ll leave the darts playing to DI Hunter.

Our thanks to Zoe from Zooloos for our copy of Hunter’s Revenge, provided so we could participate in this blog tour. The opinions here are those of Scintilla. For other perspectives on this book, check out the other bloggers on this tour. 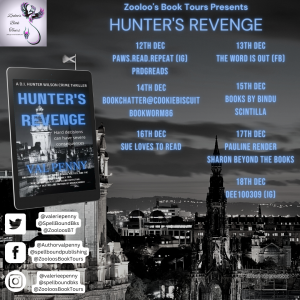 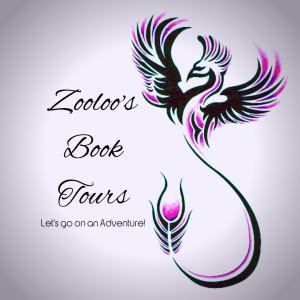