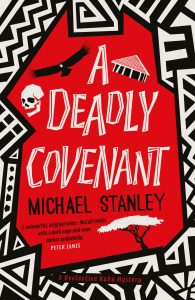 If you have been following Detective Kubu from the beginning, you haven’t actually been following Detective Kubu from the beginning. Way back in book 1 of this series, Detective Kubu was a young but already established detective, married, with a reputation at work as a thorough and serious detective who enjoyed thorough and serious meals. After pursuing bad guys and the good life for a number of books, the authors (Michael Stanley is the pen name of a pair of authors) turn their attention back to the detective’s earliest days on the force. This book continues that jump backward in time, as Kubu’s relationship with Joy makes early progress, he gets to know the gruff Scottish coroner who becomes his fast friend, and he begins to earn his reputation for being both thorough and willing to follow a case through to the end, no matter who stands in his way.

A water project in a desert community is interrupted by a gruesome discovery. A skeleton has been uncovered by a bulldozer. A coroner is needed, so Dr. Ian MacGregor is summoned from the Botswana capital Gaborone to examine the remains. Young detective David “Kubu” Bengu is tasked with accompanying the doctor so he can learn some pointers from the experienced forensic officer. When they get there, they soon discover that there are several more skeletons buried in the desert, including some of children. The skeletons are of Bushmen and apparently they had been murdered.

The deaths of the Bushmen are not the only mysteries they uncover. A grieving father wants closure on his son’s disappearance into the desert many years before. Another local man disappeared into the desert around the same time. Before they know it, Kubu and MacGregor are investigating multiple cold cases with no clues except for the skeletal remains of the Bushmen.

Then, murders begin in the village. Suddenly the cold case is superseded by a much hotter case and the locals do not appreciate the interlopers in their midst. Is it possible that the cases are related, that the uncovering of buried bones in the desert has awakened a dormant threat? If so, who might be the next target of a killer who has been lying in wait for decades?

Kubu is a character that makes me smile with pleasure. A brilliant detective, he is a massive, massive human. “Kubu” is the local word for “hippo.” Kubu is over 300 pounds, although much of this is muscle and not fat (he may not be in perfect shape, but most of his weight is well distributed on this very large man). He is incredibly sharp and puts together subtle clues as well as solid instincts in reading people. Most people. When it comes to the beautiful young woman from the records department whom he has begun seeing, though, he becomes incredibly shy and unable to read her at all. Fortunately, she is not a subject of his inquiry in this case, so his reticence does not affect his ability to catch a killer.

A Deadly Covenant is more than a detective novel, although it is a very good detective novel. It is also an examination of the poison of racism and the power of greed. Secrets of evil deeds can sprout into future evil deeds, and none of us can truly escape our past.

Our thanks to Anne Cater of Random Things for our copy of A Deadly Covenant, provided so we could participate in this blog tour. The opinions here are solely those of Scintilla. For other perspectives on this novel, check out the other bloggers on this tour.