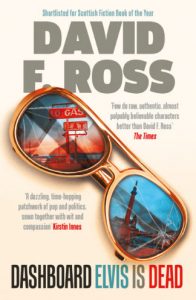 In many ways this book is very strange. The story begins by following two paths which fatefully intersect in Phoenix, AZ. Jude is a young biracial woman from Humble, TX (for those unfamiliar with Texas, the “H” is silent and it is pronounced “Umble.” After her high school boyfriend is killed in a mass shooting, Jude leaves Texas on a Greyhound bus and heads toward California to hopefully find an aunt she had never met. “The Hyptones” are a band from Glasgow on their first American tour. Well, not exactly a tour. It was a cross country voyage from New York to California that was proving to be far less than what they had been promised.

(Totally unrelated to the review, my cousin Keith Tuck was a football coach in Humble, TX. I never in my life would have expected to review a book that involves the Humble High School football team of just a few years before Keith taught there.)

Tragedy strikes when these two stories collide in Phoenix, and both Jude and the members of The Hyptones are never the same. Jude does get to San Francisco but never meets her aunt. Instead she finds a home with a couple who care for foster children. There again, though, tragedy takes her from that home and she ends up in New York City, eventually becoming a photographer of some renown. The band members return separately to Glasgow, their dreams of stardom having shattered in Phoenix and for most of them a new and much darker life awaits.

So far, so good? OK, throw in an appearance by the character David F. Ross. Astute readers–actually, even readers as clueless as I can be–may notice a profound similarity in the name of the author and the name of this character. Indeed, the author makes more than one appearance in his own book. In fact, he plays a pivotal role at the end, but that is edging toward spoiler territory so let’s not go there. Presumably this is a character rather than the actual author–a character who shares the author’s name, who is also an author, who is writing a book called Dashboard Elvis Is Dead about the same events we are reading about. Art imitates life imitates hallucinogens? Well, Haight-Asbury is mentioned, so draw your own conclusions.

For reasons best explained in the book itself, Jude eventually makes her way to Glasgow in search of The Hyptones. Her intent is to find out what happened to them after that night in Phoenix. She has family and work reasons for the trip as well. As much as anything, she is hoping to close the circle on her own story about her own life.

I will admit that I struggled in the earliest chapters to stay with the story. Some of the jumps from Jude’s story to The Hyptones were different enough that I got distracted. But the final two thirds of the book more than made up for my early confusion. Jude’s story is moving and powerful, full of loss and survival. When the narrative focuses on her, it is breathtaking. Ross explores challenges of family (both biological and found), race, sexuality and gender identity, guilt, loss, and the power of a single moment to change the direction of a life. At the end of this book, part of me was shaking my head and wondering what in the world I had just finished. Most of me, though, was tingling with the excitement of having experienced something unique and electric.

Our thanks to Anne Cater of Random Things for our copy of Dashboard Elvis Is Dead, provided so we could participate in this blog tour. The opinions here are solely those of Scintilla. For other perspectives on this book, check out the other bloggers on this tour.