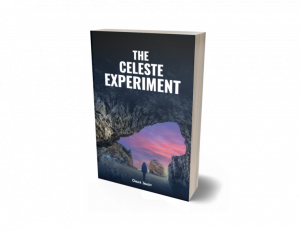 The Celeste Experiment starts with a family tragedy. A billionaire heiress, recently married, is diagnosed with cancer. Every medical intervention is tried, with no success. So the couple begins pursuing religious cures: Christianity, Judaism, eastern religions, Islam. Sadly, Celeste dies.

To do so, he needs to construct the perfect prophet. He finds a young woman who satisfies all of the criteria he has set. She does not know she is part of his plan. He carefully arranges for her to experience the multiple life stages that other prophets faced: travel, love, working as a shepherd. It’s an odd and eclectic set of experiences he orchestrates, but then again prophets are rather odd and eclectic people.

Of course, it’s one thing to study prophets, try to reconstruct their formative experiences, drop an unknowing young woman into your experiment. It’s quite another to have a living, breathing, feeling, intelligent human being involved. Sometimes people do not go according to plan.

Omar Imady’s book is clever and intriguing. I was reminded of The Boys from Brazil, where a group of committed Nazis led by the infamous Joseph Mengele have cloned Adolph Hitler 94 times and are trying to replicate the circumstances of his upbringing in the hopes that one of those 94 clones would implement a “Fourth Reich.” The Celeste Experiment is, perhaps, a less ambitious plot, involving a single young woman. Then again, destroying religion is a rather audacious goal.

Imady is himself a child of varied cultures and influences. That personal history clearly informs and influences his book for the better. The Celeste Experiment is a fascinating semi-sci fi thought experiment that definitely sets up a battle royale between nature and nurture. Regardless of the outcome, people are people and do not always act according to the plans of others.

Our thanks to Anne Cater of Random Things for our copy of The Celeste Experiment, given so we could participate in this blog tour. The opinions here are solely those of Scintilla. For other perspectives on this novel, check out the other bloggers on this tour.