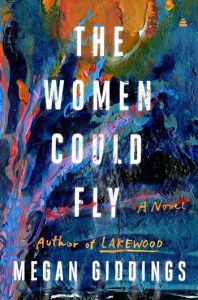 It’s not fair to say that things are worse today for women, people of color, LGTBQ+, or any other minority or oppressed group in the world than they ever have been. In many areas that is demonstrably untrue. That is not to congratulate my country or any other. Just because we may not be as bad as we were does not mean we are good.

Megan Giddings’ newest novel, , uses a fantasy trope to demonstrate that the present may not be worse than the past but for many people it still is not very good. Josephine Walker is a young woman living in Michigan. Although her father is white, she has inherited her mother’s dark skin and tight curls. She is on social media, she works in a museum, she is kind of in a relationship but they are not much more than friends-with-benefits, and she has a decent relationship with her father and her stepsister.

Still, she is entering a challenging period of her life. In this version of Michigan, indeed of the entire U.S., young women must make a choice before they turn 30. They can choose to renounce Satan and give themselves over to the holy pursuits of family and children. A harder option is to remain single but put themselves under the sponsorship and protection of a man, usually a father or other male relative, who promises to sponsor her and make sure she remains free from Satan’s influence. Or she can declare herself to be a witch and submit to being watched and guarded, never owning property or a credit card or a cell phone,

This may be better than in the old days or as things are in the south. Witches are seldom burned in Michigan. Women who practice witchcraft without a license are given a trial. Then they are burned. And falsely accusing someone of witchcraft is itself a crime. Proof of some sort is required. Still, young women, especially women of color, especially LGBTQ+ women (and men and non-binary persons), especially those without means, do get accused and do get burned. And Josephine checks basically all of those boxes. Black, bisexual, not-rich, single, young. Perhaps worst of all, abandoned by her mother as a young girl. The only way a woman could abandon her family was obviously to become a witch, and if she had left to practice witchcraft almost certainly her daughter must also be a witch.

Josephine’s mother had been missing for fourteen years. Missing and by now presumed dead. However, upon her being legally declared dead, a will is found. In the will, Josephine is required to take some things to Lake Superior and get on a boat. It sounds ridiculous, but the will is very clear that she will not inherit any money unless she makes this trip by a certain date. What Josephine does not know is that the trip will change everything she believes is true.

Including the central facts of her own life.

I’m somehow reminded of the fear we humans feel toward things like wolves and non-venomous snakes and spiders. Wolves may pose a threat toward livestock, but are seldom a threat to humans. Most snakes and most spiders are not only harmless for humans, they are beneficial, eating insects and rodents that pose much greater dangers. Yet we are an incredible threat to these creatures, often killing indiscriminately and without consideration to the ecological damage we are doing.

Historically, “witches” have been killed. Usually targeted for their differences rather than any real or suspected powers, women who dared to speak up against the systems that oppressed them were killed. Homosexuals, people of color, the poor, all have been the focus of violent oppression through history. Some people tried to hide who they were, to fit in regardless of the personal cost. Others simply could not or would not.

Giddings takes these very real oppressions and adds in another possibility: witchcraft. And, as with wolves and women, the violence done toward these witches affects the larger societal ecosystem far more severely than any possible harm done by people who could fly or transform or create inspirational art. A compelling story, an entrancing protagonist, and an altogether wicked-good book.

Our thanks to Anne Cater of Random Things and her able colleague Tracy Felton of Compulsive Readers for our copy of The Women Could Fly, provided so we could participate in this blog tour. The opinions here are solely those of Scintilla. For other perspectives, check out the other bloggers on this tour.