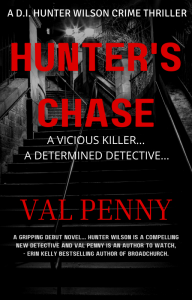 DI Hunter Wilson does like his darts in the evening, enjoying pints with his mates at his favorite Edinburgh pub. Unfortunately, when a body is tripped over at a local golf course, darts take a backseat to work.

The middle-aged woman shows evidence of being struck by a car. Clearly the impact occurred elsewhere. The body was buried in a shallow grave in the woods near the greens, a location likely to have successfully kept the body hidden if not for a local burglar’s bad luck of tripping over it and breaking his ankle.

A car is an unusual murder weapon, but soon there is a hit and run right in front of DI Wilson. Later, there is another. Are these all the same driver? Is there a strange wave of unrelated car deaths in Edinburgh?

And why was the burglar carrying a wad of bills around a plastic bag of cocaine? A bag which did not have his fingerprints on it and which he swore did not belong to him.

In this opening to a crime series that I have become very fond of, Val Penny introduces the determined character of Hunter Wilson and his team. DI Wilson is a dogged investigator, skilled at delegating responsibility to his team and taking advantage of their talents while leading them in investigating and interrogating the suspects of the crimes. Wilson is smart, finding connections between people and events that are not obvious until he points them out. He is also a solid judge of character, refusing to give up on a young detective who is the son of a former thorn in Wilson’s side.

Penny’s writing is sharp and well-paced. The books are filled with twists, not every answer is provided by the last page, and every character contributes to the narrative. This is a very satisfying mystery and a terrific opener to a series.

Our thanks to Zoe of Zooloos for our copy of Hunter’s Chase, provided so we could participate in this blog tour. The opinions here are solely those of Scintilla. For other perspectives, check out the other bloggers on this tour.