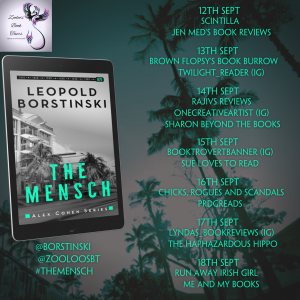 Alex Cohen is trying to retire. He has divested himself from most of his illegal businesses. He has moved to Florida where he is surrounded by family. He is trying to put his mob days behind him and live out his life, surrounded by his grandchildren.

Mob life does not come with a 401K plan. Social Security is based on declared income and much of Cohen’s income was never declared. Growing up poor, fighting his way off the streets, brutally rising in the Jewish mafia’s hierarchy, Cohen is not able to just give up on steady revenue streams. It may betray his wife, it may disappoint his children, it may enrage his lieutenants, but the fear of returning to poverty drives Cohen to a frenzy of swirling around, trying to secure his future.

Once you’re in the mob, it’s awfully hard to get out. Even when you try, you can’t outrun the past.

Perhaps investing in movies would be a legitimate option. When you’re Alex Cohen, though, the opportunities come on the seedier side of the industry. Perhaps hiring a driver would be a nice perk at his age. Then again, drivers might talk to the wrong people about the wrong things and then you have to drive yourself again. Perhaps moving to Israel like his friend Meyer Lansky did would help him let go. Then again, Israel is welcoming all Jews–except those with reputations like Lansky and Cohen have. Perhaps a meeting with his top people could help resolve the situation. Of course, having your car explode with you in it is also a resolution of sorts. (Not entirely a spoiler, since that happens on the first pages of the novel).

The entire Alex Cohen series features a man frightened of losing everything. From his beginning as an immigrant to New York, scrabbling on the streets for enough money to help pay his family’s rent, to his semi-retirement in Florida, Cohen is driven by the fear of losing. Those who threaten to take his security away are threats to him, personally, and must be eliminated. Those who threaten the safety and well-being of his family are threats that must be eliminated. Even trusted friends and family who threaten to take something away from Cohen might be threats. They are just harder to eliminate because you have to be absolutely certain of their intentions. A frightened man can be a dangerous man, and there is no one more scared or more deadly than Alex Cohen.

Leopold Borstinski has a dark series with a darker protagonist. I would never excuse Cohen’s choices nor apologize for his actions–nor would he. But Cohen is a creature of his environment as much as of his choices. A man who fears losing anything is always one step away from losing everything.

Our thanks to Zoe of Zooloos for our copy of The Mensch, provided so we could participate in this blog tour. The opinions here are solely those of Scintilla. For other perspectives, check out the other bloggers on this tour.