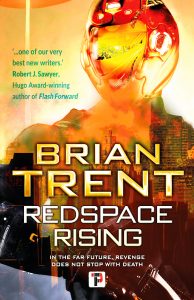 Harris Alexander Pope died, then everything started changing. Pope was a Partisan, a member of the army for the government of Mars, an elite and modified soldier who was skilled in infiltration and assassination. Up to the moment he was killed, he was one of the most effective killing machines of the Partisan government.

In a way, that is why he was killed. For 20 years he had been dealing death to the rebels and most of them were eager to see him dead. Not all of them, though. His brother was a leader in the rebellion and wanted to get his brother back. Not just for a warm and fuzzy family reunion, but Harris Pope had been sent to the Partisans as an undercover agent, his mind rewired so he could pass any interrogation or mind probe with complete honesty. His memories of his family, his political sympathies, his mission, all were erased and stored until they could be reloaded into him and he could act on his mission: to completely destroy the Partisan government.

Death was no longer necessarily the end of life. Consciousness could be saved and uploaded into replacement bodies. Usually people had these bodies designed according to specifications and stored until needed. They might just be younger, healthier versions of their “birth bodies.” They did not have to be. Your consciousness could be uploaded into a teenager. Someone of a different gender than your birth gender. A different race. Different proportions. Various augments. Medicine had also progressed to the point where someone could shoot Harris through the heart, upload his previously deleted memories, and then heal and resurrect him.

With his memories restored, Harris refocuses on his mission. But how do you end immortal consciousnesses? If a simple soldier can be saved and restored, anyone can. And although Harris can change the course of the war, his enemies are playing a long game that started long before and can play out long after their existing bodies have died.

John Scalzi’s “Old Man’s War” series has some of these same themes, as does “Altered Carbon.” Redspace Rising stands strong in that company. Brian Trent has a plot with multiple twists. Promises are made to readers early on that are fulfilled much later in the narrative, deposits paid with interest. This is a “hard” science fiction story that reminds me of some of the classics in the genre, albeit without the racism and sexism that informed far too many of those “Golden Age” works.

If you could reprogram someone, should you? If you could extend your life indefinitely, hopping from body to body, would you? If a genetic copy of someone, say a movie star, could be created without them knowing about it, what are the implications?

Trent deals with these and many other dilemmas with thoughtfulness and decency. His characters are trying to live ethical lives in their own light, with their own challenges and opportunities, and facing intractable enemies that have sometimes had centuries to perfect their plans. As always, the question worth asking is, “Just because you can do something, should you do it?”

Our thanks to Anne Cater of Random Things for our copy of Redspace Rising, given in exchange for our honest review as part of this blog tour. The opinions here are solely those of Scintilla. For other perspectives on this novel, check out the other bloggers on this tour.our