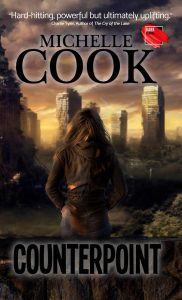 In her previous book, Tipping Point, Michelle Cook brings us to a near-future world that has been brutalized by huge changes in the climate, destroying countries and governments, leaving England in the hands of a barely democratic cabal of wealthy business moguls. A few climate activists, along with a brilliant scientist, work on a plan to get his invention out to the world. His invention, designed to reverse global warming, would work but at the expense of the rich and powerful, and they are much more interested in their profits today than in the potential future of the world.

Essie was one of the leaders of that group. In the end, the group lost and was scattered. The plans for the machine survived and were hidden. Seemingly, though, anyone that could do anything about it was gone: dead or in hiding.

Essie and her husband Seth, a defrocked cleric from the state-approved church, and their daughter Willow are trying to live under the radar. They maintain very limited contact with the scientist who had escaped to Cuba. As far as they know, the rest of their group is dead. However, a prototype of the climate changing machine is being built in Cuba and they are trying to come up with a way to introduce it to the world without it falling into the hands of the oligarchs.

Essie, though, makes a critical mistake and the news gets out that the scientist has escaped and the device exists. Agents are sent to capture or kill Essie, Seth, and Willow. Essie flees to London while Seth and Willow escape to visit his parents. Perhaps even more concerning: a hurricane is aiming directly at Cuba with a high likelihood that it will completely drown the island and destroy everything.

Michelle Cook’s England, and by description much of the rest of the world, is a hellscape of brutal heat, vicious storms, and violent governments. Huge areas of the world have become uninhabitable, either from rising seas or from growing deserts. Our current category 1-4 hurricanes are inadequate to rate the new monster storms; a category 7 takes out the island of Cuba. Rains soak London, leading the Thames to break through and ravage the city. Wealthy and powerful people use this chaos and mass destruction to cement advantages they had already built up by using the very hydrocarbons that led to global warming. It’s not a very hopeful picture of what we could become, but there is a lot of evidence that human behavior will operate exactly like that.

Hopefully those people exist in our world and are able to remake it so my grandchildren and their grandchildren still have a planet they can truly call home.

Our thanks to Rachel Gilbey of Rachel’s Random Resources for our copy of the novel Counterpoint, provided so we could participate in this blog tour. The opinions here are solely those of Scintilla. For other perspectives, check out the other bloggers on this tour.