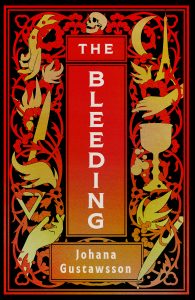 I was a teenager when Mount St. Helens erupted. For months prior, scientists had warned that the volcano was returning to life. A swelling bulge showed where lava was building up. Gas and ash releases and small tremors revealed the mountain’s disquiet. A process that developed over centuries finally released in an instant. Despite the warnings from both the mountain and from scientists, some in the shadow of the volcano refused to evacuate. More than 50 people died in the eruption.

The Bleeding follows the investigation of a murder. A retired teacher covered in blood is sitting on the steps of her home near Montreal. Inside, her husband lies on the floor, stabbed 31 times. Detective Maxine Grant is called to the home, the suspect having refused to say anything more than Lieutenant Grant’s name. They have a history: Maxine Grant was a primary school student of the suspect.

As the police and crime scene investigators search the house they find another mystery. There are seven severed hands stored in seven tables around the ground floor of the home. None of them belong to the deceased. All of them are right hands, so presumably there are seven bodies associated with those hands. This would obviously be shocking anywhere–but in the home of a respected university professor and a retired primary-school teacher, it is unfathomable.

Some 53 years earlier, a teenage girl struggled to escape bullying classmates. Lina had already responded by starting a small fire that burned some of the hair of one of the bullies. The result was punishment by the school–and intensified bullying from the girl whose hair was burned. Lina was forced to go directly to her mother’s workplace after school, a care home for elderly residents. There, she is befriended by one of the patients, an old woman who has been institutionalized there for decades.

In 1899, another 50 years earlier, a young mother grieved the deaths of her two daughters. Lucienne had gone to bed when a fire broke out and destroyed her home in Paris. Her two young children’s bodies were not found. They were missing and presumed dead. Unwilling to accept this, Lucienne solicits the help of a private investigator, a spiritualist friend, and a medium in the hopes of discovering what truly happened to her children.

Author Johana Gustawsson jumps back and forth in time, from 2002 to 1949 to 1899, Maxine and Lina and Lucienne each tell their own stories: the investigator, the teenager, and the mother. Pain and crimes of the past carry forward, with the events of 1899 reverberating all the way down to 2002. Had a scientist been studying these people, they might have warned of a building eruption, a cataclysm that may have appeared to be sudden but was foretold by tremors and smoke and ash long before.

Translated from French by David Warriner, this is a story that is part crime novel and part horror story. Warriner’s translation carries the building tension perfectly. Despite the appearance of everything being resolved right away–after all, they captured the blood-soaked suspect on the steps of her own porch–the tension continues to mount as the women tell their stories of loss, of betrayal, and of seduction into very dark practices.

Any time witchcraft and murder are combined, things are not what they seem to be.

Our thanks to Anne Cater of Random Things for our copy of The Bleeding, provided so we could participate in this blog tour. The opinions here are solely those of Scintilla. For other perspectives on this novel, check out the other bloggers on this tour.