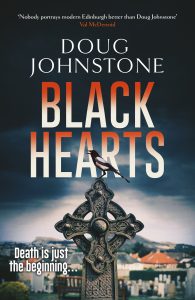 In her years working in the burial business, Dorothy Skelf has seen almost every imaginable reaction to death. A fist fight at the gravesite that results in knocking over the casket and spilling the body onto the ground is rather unusual even for her. A young man is convinced that his father is still alive, and that his disappearance and presumed death is the reason they are burying his mother. He is also convinced that his uncle knows something about the disappearance, which leads to the fight, which leads to mom’s body lying on the ground.

Dorothy’s granddaughter, Hannah McNamara, is newly married to her longtime girlfriend. When Lauren appears at a lunch Hannah is enjoying with her wife Indy, it is a bit puzzling. When Lauren then sits next to Hannah at a lecture, it is a bit disturbing. But when Lauren texts a selfie of herself and Hannah to Indy, it becomes very concerning and threatens the equanimity of the married couple.

Jenny McNamara, Hannah’s mom and Dorothy’s daughter, is struggling to come to terms with the events of the previous year. Her ex-husband had become a murderer and a kidnapper and tried to kill both Jenny and Dorothy. Jenny had turned the tables on him and set him on fire in a boat. She is coping with alcohol and sex, resisting therapy, and struggling with nightmares. And that’s all before she has to face her ex-husband’s mother and sister.

Then there’s the elderly man whose late wife is beating him up at night.

Doug Johnstone seems to like his characters. He writes them very creatively, each very different from the other, bonded by family connection and the common (or is it uncommon) professions of mortuary services and private investigations–definitely one of the most unusual pairings I have ever come across in mystery novels. They are strong, intelligent, wounded women. Yet for characters he seems to like he puts them into dangerous situation after dangerous situation: near drownings, fist fights, drugged and tied to mortuary tables, locked in refrigerators, fires. It is unfair to say they escape by the skin of their teeth, though. Most of the time, they escape by relying on each other, by working together, by supporting each other, by love overcoming everything.

This series is weird and wonderful. Beautifully written, amazing protagonists, and twist after twist. Edinburgh seems to be a beautiful and historic city. It is also full of people with very black hearts. Fortunately, it also has the enlightened hearts of this family of investigators.

Our thanks to Anne Cater of Random Things for our copy of Black Hearts, given to us so we could participate in this blog tour. The opinions here are solely those of Scintilla. For other perspectives on this novel, check out the other bloggers on this tour.