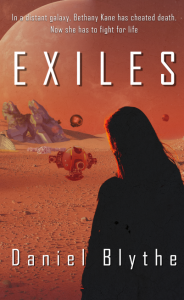 Mia is on patrol, hunting for food and scouting for danger. The town has learned much about the local flora and fauna. Some of it is edible. Some of it will try to kill you. None of it is made for humans.

The town is on an Earth-like planet on the edge of the galaxy. There are no shipping lanes, other settlements, nearby colonized worlds, They are as alone as can be. There are exactly 46 residents, all of them under the age of 18. There were 51.

When a ship’s escape pod crashes near Mia, her first instinct is to respond to the threat. The town has been exiled. Abandoned. There is no impending rescue, there is no hope for the future. New people bring new dangers.

However, 16-year old Bethany Kane does not seem to be threatening. She has survived the crash with only minor injuries thanks to the outstanding protection of the escape pod. Despite Mia’s willingness, even eagerness, to kill her on the spot, she is overruled by the town’s leader and other members of the response team. Still, they are all wary and determined to keep an eye on this newcomer.

As Bethany comes to grips with her new situation, questions begin to rise in people’s minds. If she escaped from a burning ship, why is there no sign of the destruction in the sky? How was she the only one not only to survive but to find their planet and land near their town?

Why after she arrives are townspeople getting murdered?

In the dystopian future the Exiles inhabit, Earth itself has withdrawn from the planets colonized by humans and is governing itself and a very few nearby planets. Eschewing capital punishment for young offenders, Earth instead sends them on a one-way trip to uninhabited planets on the outer rim of the galaxy. Essentially it is a death sentence without authorities getting their hands dirty. Out of sight, out of mind, out of options. Daniel Blythe builds a galaxy where children can be held guilty for the crimes of their parents, where petty theft or classroom rebelliousness can be punished in the same way as murder, and where exile and starvation are deemed more acceptable than incarceration or rehabilitation. It is a dark look at the dark side of humanity.

This book feels like it’s the beginning of a series, though no word yet on whether a sequel is pending. I think there is a lot more room to explore both the planet and the galaxy with these characters. It may be a YA novel (I’d suggest that’s appropriate for more mature YA readers–younger readers may be disturbed by some of the scenes) but it definitely is appealing to this no-longer-young adult reader.

Our thanks to Zoe of Zooloos for our copy of Exiles, provided so we could participate in this blog tour. The opinions here are solely those of Scintilla. For other perspectives on this book, check out the other bloggers on this tour.