Book Review: When the Children Fight Back, Children of the Eye Book 3, Barry Kirwan 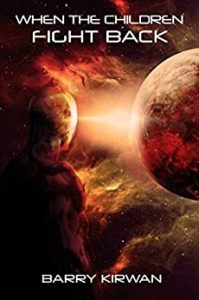 Science Fiction: When the Children Fight Back, Children of the Eye Book 3, Barry Kirwan

The major disappointment with this book was getting to the last page. This trilogy of books really reminds me of winter days hiding in the sci fi corner of my local library when I was a kid, hoping my mother might forget about me and I could stay the night and just keep reading and reading.

My mother was not a forgetful woman. I still have not spent the night in a library. Bucket list.

In the second book of the trilogy the people of earth have fought off both the Axleth invaders and their enemies, the AI known simply as “the Eye.” A ship of genetically modified youth along with a few fully human representatives have already left on the centuries-long sleeper ship to join with 11 other races in fighting the homeworld of the Eye. However, they left before some critical information came to light, so Nathan and Lara, leaders of the earth forces, take a small crew on a modified ship to catch up to the others.

Waiting for them is an armada assembled by the Axleth to defeat the Eye. Twelve races bringing their various talents and cultures and technologies to the fight. Except they are not all there. One of the races decided to attack early, hoping to defeat the Eye, then defeat the other armies as they arrived and begin conquering the galaxy. Had this tactic succeeded, the book would have been very different. Instead, their gathering of 12 armies is a bit shorthanded.

Barry Kirwan asks some difficult and ultimately unanswerable questions. Can twelve very different species which never interacted directly with each other successfully plan and communicate a coordinated attack against a common enemy? How can misunderstandings and cultural values be reconciled between peoples with no common history, culture, or language? Assuming they are successful, what happens then? Do they all simply return to their home worlds and ignore the rest of the galaxy? Or will they choose to go on a galaxy conquering spree of their own?

Kirwan gives his answer to a few of those questions. Whether he is right or not we don’t yet know. I personally would like to think that a mutual desire for knowledge and understanding would lead to acceptance and amity between worlds. That little boy buried in sci fi books in the corner of the library hopes so, too.

Our thanks to Rachel Gilbey of Rachel’s Random Resources for our copy of When the Children Fight Back, given so we could participate in this blog tour. The opinions here are solely those of Scintilla. For other perspectives on this novel, check out the other bloggers on this tour.

Book Review: When the Children Fight Back, Children of the Eye Book 3, Barry Kirwan

One thought on “Book Review: When the Children Fight Back, Barry Kirwan”