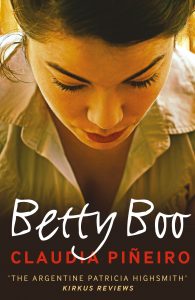 Having now read two books by Argentinian writers I can hardly call myself an expert in South American literature. Limited as I am by monolingualism, I have no perspective on the power or beauty of the writing in Spanish. What I do see is a certain common thread between both of the Argentinian books I have read, along with a number of other books from countries with certain recent historical parallels.

Nurit Iscar is a writer. Once an author of significant renown, her last book was poorly received, badly reviewed, and was considered both a commercial and a creative disaster. In the three years since then she has existed by ghostwriting for others, afraid to put herself out there again.

Jaime Brena was the leading crime reporter for the leading newspaper in Buenos Aires. Was. After a number of rows with the paper’s editor, Jaime has been banished to the back pages to write articles about why more women sleep on their backs and why more men sleep on their stomachs, among other burning issues that require his talents and contacts.

When a prominent man is murdered in his own house, the event is not of immediate interest to either of them. Nurit is focused on avoiding the news and working on her commission. Jaime is stuck in the back pages. However, both of them get drawn into the story despite their intentions. Jaime gets a call from one of his sources, a high-ranking police official who is investigating the crime. Nurit is asked to write some stories around the crime for the newspaper–more human interest than breaking news. Soon, they realize that this is a much broader crime than it seemed at first, with tentacles stretching throughout Argentina and beyond, even as far as the United States.

Miranda France is an outstanding translator. She has taken the power of Claudia Piñeiro’s story and characters and brought them to life in English. She has a deft touch and knows when to interpret an item for a foreign audience and when to simply present it and let the audience figure it out in context. Translators can do too much and they can do too little. France gets it just right.

Piñeiro, along with a number of other books I’ve read from other places, writes with a huge weight on her shoulders. She, like her characters, has experienced the trauma of a brutal government. Typically, books by authors from democratic societies treat authoritarianism as curable. Our hero, leading a scrappy bunch of like-minded rebels, succeeds in removing the villainous dictator and restoring peace and harmony to the galaxy. Piñeiro is under no such illusions. She has lived under an oppressive and brutal regime. Her characters have lived under an oppressive and brutal regime. The echoes of those times reverberate in their lives still. For most people, repression is not something that can be overcome. It must be endured.

Our thanks to Anne Cater of Random Things for our copy of Betty Boo, given for our participation in this blog tour. The opinions here are solely those of Scintilla. For other perspectives on this novel, check out the other bloggers on this tour.