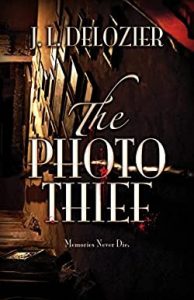 In the interest of full disclosure, J.L. Delozier is a friend of ours who lives in our town. However,
our policy is fairly simple: if we don’t like a book, we don’t review it. We won’t bash anyone’s
book, but there are a number of books that we just don’t like enough to review. The Photo Thief
is not one of those books. I have reviewed all of her previous books, and I am confident in
saying this is her best one yet.

Detective Dan Brennan has just come back from bereavement leave. His precious five-year old
daughter, Elle, died from cancer. As so often happens, his marriage did not survive the trauma.
His long-time detective partner had also died about a year before, so his return to the force is
without his partner, without his daughter, and without his wife.
Brennan is assigned what is described as an easy case to help him get back on track. A young,
wealthy woman living in a Philadelphia mansion has fallen down the stairs. The police have
been called as they always are to a sudden death outside the hospital, but this seems fairly
clear-cut. She fell, or committed suicide.

Except she fell backwards over the railing. And there were strange burns on her chest and back.
And she had enough prescription drugs in her system to have killed her anyway but there was
no evidence that she had taken those or any other drugs. And her grandfather, who also lived in
the mansion, was convinced that his surgeon grandson-in-law had killed her, despite the man
being at the hospital in the O.R. when she died.

Oh, and the woman’s daughter, Cassandra, talks to the ghosts who are in the photos of their
music room.

Delozier’s book is hard to put down. She brings in corrupt cops, the mob, old money, and a
detective who is emotionally spent. Cassandra is an absolute scene-stealer. Were this a movie
(please?!), they would need a young actress who could own the camera every time she was on
screen. She is either insane, gifted, or quite ill. Possibly all three. She is obsessed with solving
cold cases, believes she can talk to ghosts, is a super-recognizer (never forgetting a face), and
endures epileptic seizures. And her great-grandfather, a war hero from WWII, still commands
respect and awe despite being a physicall frail man in his 90s. Bennett has to decide who he
can trust, what is actually true, and how he can conduct an investigation with mob ties without
joining the bodies on the coroner’s table himself.

I am not sure whether there is a sequel coming, but I certainly hope so. Dan Bennett and
Cassandra make a great team and both of them feel like they have much more to their stories
than could fit into one book. Also, having read all of this author’s books, it is an absolute joy to
see her grow as an author. I like her earlier books. This one is her best so far. I can’t wait to see
what she does next.

Our thanks to the author for our copy of the book, given to us as a gift.