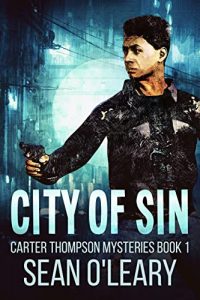 Despite it being a big city and having “big city” issues, it’s hard to think of Sidney, Australia beyond the beautiful pictures of the harbor and the opera house. Koalas and kangaroos live nearby, wildfires occasionally threaten, but most of the photos we see in the U.S. could have been sent by the tourism board. Lights at night, clear skies during the day, it is postcard-idyllic.

That’s not the city of Carter Thompson. Thompson is an investigator. He works for the government but is independent of the police. Probably just as well, because he has some habits that would not endear him to fellow officers. He uses drugs. He has been known to sleep with prostitutes. He is quite willing to beat a suspect if he thinks it would help solve a case–though he is careful not to leave visible marks or have any witnesses. He is a dark figure, both literally and figuratively. A descendant of one of the Australian Aboriginal peoples, his skin tone marks him as “other” in the eyes of most Australians. His character is also dark, which may be essential to finding things that are hidden in the night.

Rhia is a prostitute just trying to make enough to support her family. A “John” she has met before has hired her to meet him in a hotel known for hookups of this nature. The man, though, is overweight, has multiple morbidities, and dies during sex. Rhia goes through his belongings, taking cash, credit cards, and a small USB memory stick. She then wipes the room down to remove her fingerprints, sneaks out of the hotel, and goes into hiding.

For this man was connected to power brokers in the city. Political, religious, business, and criminal elements worked with him. And these people would do anything to get that memory stick back.

Because of the man’s connections, Thompson is put onto the case. Pursuing it could hurt the power of some important people in Sidney, people who are not willing to let go of their power. These are people who know where he lives, know where his ex-wife and daughter live, and are more than willing to make their offers with both cash and violence. Meeting God becomes a real option for Carter Thompson, and the City of Sin may have roads paved with good intentions.

Sean O’Leary does not seem like a dark character, but he certainly writes them well. The previous book of his that we reviewed, The Heat, featured a protagonist who was damaged from broken relationships and drug abuse. Carter Thompson has some of the same demons, though he is a very different character than Jake from The Heat. While Jake was trying to become a better version of himself, we get the feeling that there is still a lot of room for growth in Carter. He is a smart, dogged, and in his own way incorruptible investigator. But he also has dark recesses full of violence and fueled by speed. And although these vices do not stop him from solving this case (though leaving room for the main antagonist to return in a future book), they threaten to overwhelm and wreck him. 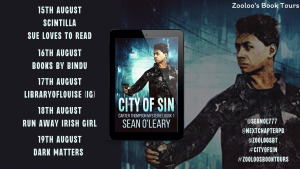 Our thanks to Zoe of Zooloos for our copy of City of Sin, provided so we could take part in this blog tour. The opinions here are those of Scintilla. For other perspectives on this novel, check out the other bloggers on this tour.

One thought on “Blog Tour: City of Sin, Sean O’Leary”