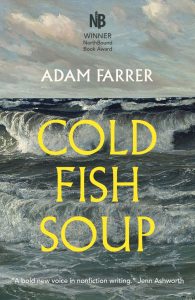 When a memoir starts with the narrator contemplating suicide, you would think that it has to get better. After all, it’s fairly obvious he did not go through with it. He finished the book, after all.

The opening scene, though, sets the tone for a dark and poignant reflection on life, death, and a small town on the fine line separating the two. Cold Fish Soup is about Adam Farrer and his relationship to his family, to his hometown of Withernsea, and about the challenge of sometimes just holding on.

Withernsea is a small Yorkshire town on the coast of the North Sea. Battered by storms, it is a town that will eventually fall into the ocean. The coastline is receding. Every year more of the community falls down the cliffside and into the angry ocean below. This reality becomes a metaphor for much of the other stories Farrer tells.

Just as parts of the town hold tightly to the land, defiantly refusing to relocate despite the encroaching waters, some of Ferrar’s family holds tightly and boldly to life. His mother and sister are members of the Ruby Red Performers, a mature burlesque group that appeared on Britain’s Got Talent. Far more about female empowerment than titillation (although they don’t mind drawing attraction to their…British-flag tassels), Adam shares both how embarrassed he was at the thought of his mother (and sister) dancing burlesque–and how he came to revel in the freedom and joie de vivre they found through their dancing.

And it is punctuated by humorous, even joyful moments. Adam’s daughter is not as fond of the ocean as her father is. The book’s title, Cold Fish Soup is a tongue-in-cheek description of the cold waters off the Withernsea coast, waters full of living–and dead–fish, waters full of sand and silt and broken buildings. Perhaps not the most conducive waters for bathing, but waters that give life to Adam on many occasions.

But much of the memoir is darker. Quite dark. It is not just the town contemplating its end. Adam’s brother, Robert, commits suicide. Adam fights suicidal ideation himself. As homes in the town fall down the slope to be swallowed by the sea, he himself fantasizes about jumping off the cliff near his parents’ house.

There were significant portions of this memoir that I could relate to. I have fought with mental illness most of my life. When the writer tells about just wanting to step closer and closer to the edge of the cliff, praying, longing, aching for the ground to give way and cast him into the depths, well, I’ve been there. Different geography, same cliff. Wishing that you could turn off your autonomic nervous system and just. stop. breathing. Curling up on the floor and hoping for some magical intervention to swallow you and make you disappear. Needing something, anything, to give you a reason to keep going and being absolutely convinced that nothing could possibly give you that reason. These are some of the battles that Adam shares very openly, some of the battles that many people around the world face, battles that you never really win but sometimes you can successfully come to a stalemate.

Sometimes, the greatest hope you can give someone is that they can make it for another five minutes. Another hour. Another evening. Another day. Cold Fish Soup offers that kind of hope. It’s not a happy “everything is going to be rainbows and unicorns” kind of memoir. It’s a memoir of surviving against that vicious enemy that lives within our own thoughts. It’s a memoir about making it one more day through the cold fish soup stock in your own life. 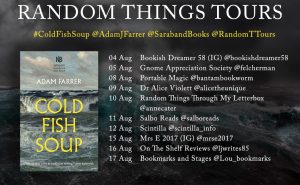 Our thanks to Anne Cater of Random Things for our copy of Cold Fish Soup, provided so we could participate in this blog tour. The opinions here are solely those of Scintilla. For other perspectives, check out the other bloggers on this tour.