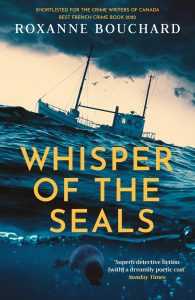 Recently I was reminded of a family vacation that included a trip through southern Ontario. My then sixteen-year-old self was very excited to be driving in a “new country;” virtually all of my driving to that point had been in and around my home near Denver, CO. My father even let me drive through the border crossing to return to the United States. Everything was going swimmingly until the Canadian guard asked, “Where are you from?” I did not think before opening my mouth – some things have not changed in 40 years – and said, “America, sir!” “The whole continent is America,” he replied. “Which country?”

With the benefit of hindsight I’m sure he was just winding up a naive teenager and expressing some justifiable Canadian pride. But the memory still brings a blush to my cheeks. North America is a large continent with more countries than those of us in my own country tend to acknowledge. We are Americans–as are those to our north and those to our south, those in the Caribbean, and the rest of this hemisphere. When reading Whisper of the Seals, I was reminded again of how diverse the Americas are–and that not everything revolves around my piece of it.

Joaquin Moralès was originally from Mexico, but had moved to Canada with his wife many years earlier. They had raised a family together, spending over 30 years together watching their children grow, Moralès moving up in his job from police officer to detective, accepting a position away from Montreal to make his wife happy. Now, that marriage is over. Their divorce settled, Moralès determines to remove his ring, take a vacation, and move forward.

Fisheries officer Simone Lord is used to checking out the equipment and harvest of boats as they return from the ocean. Most of her duties keep her onshore, but when her boss asks her to step in at the last minute as the observing officer on a seal hunt she feels she has no choice but to agree. Seal hunts are regular features in her part of Quebec and although this is extremely early in the year to set out, it is certainly not illegal.

Moralès and Lord had previously met, but did not realize that their lives were going to become connected again through a violent murder on shore and another murder at sea. The ski vacation becomes a working vacation and the seal hunt finds some very different things to catch. The two cases become intertwined, the danger level climbs, and the investigators find they are racing the clock as much as they are the criminals.

Roxanne Bouchard beautifully captures the spirit of her characters and allows them to reveal themselves through the pages. In Moralès we see the twisted emotions involved in a divorce: relief, sorrow, regret, anger, longing, emptiness, and many others. A knot tied over 30 years does not unravel with a signature on a document. Yes, obviously, that knot had loosened through the years to get to this point, but nobody can close a 30-year chapter in life without feeling a wave of mixed emotions. A marriage may have a fixed beginning and ending point, but life can not be so cleanly turned on and off. As Moralès comes to terms with closing a chapter and possibly opening a new one, another couple of characters makes tentative steps toward beginning their own relationship. Lord reflects upon her own drivenness and how that has possibly contributed to her long rejection of any relationship.

Throughout, the bleak, harsh, beautiful Canadian landscape (and oceanscape) plays a role. Snow, ice, storms, sun. The stunning cold and the ferocious wind. The contrast of red seal blood on white ice. The fear and danger of getting caught in pack ice. Bouchard uses the landscape and weather to both reflect the storms within the characters’ lives and to change the direction of the plot. It’s both beautiful and effective.

I am adding a paragraph after originally posting to commend the work of translator David Warriner. Translations are a special form of literature. They owe fidelity to the language, story, and imagination of the writer, but cannot hold so tightly to the original language that they lose the music in the new one. Warriner has walked that line, clearly holding faithfully to the author’s original and yet bringing a delightful facility with words to the translation. Thanks to him, I have found a new author to appreciate. 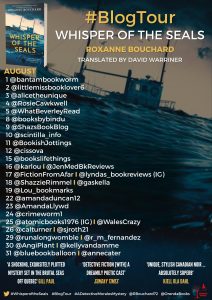 Our thanks to Anne Cater of Random Things for our copy of Whisper of the Seals, provided so we could participate in this blog tour. The opinions here are solely those of Scintilla. For other perspectives on this book, check out the other bloggers on this tour.

One thought on “Blog Tour: Whisper of the Seals, Roxanne Bouchard”