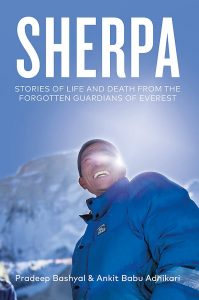 Sometimes I play a mental game with myself as I’m reading a book. It has different parameters based on the type of book. For some it’s, “Who would play what role in the movie adaptation?” For others it’s “who would crush the radio/audio version of this book?”

I’m an American, so my first thought for Sherpa was that Morgan Freeman could narrate the documentary. It seems more appropriate that it be narrated by a south Asian voice, though.

That this book reads like an incredibly well-done documentary is perhaps no surprise. Co-author Pradeep Bashyal is a longtime Nepali journalist who has worked with the BBC among other outlets. His collaborator, Ankit Babu Adhikari is former journalist, social scientist, and musician. Adhikari is also Nepali. The two of them worked together on a documentary several years ago, so they have a long history of producing highly informative and well received stories.

Sherpa is a series of stories gleaned mostly from personal interviews conducted over a period of many years. It tells of the transformation of the Sherpa people, from unknown and poverty stricken residents of a largely infertile and unfriendly territory into the people now known worldwide for their stamina and strength. Indeed, experts in guiding novices through the challenges of difficult projects are now called “sherpas;” which makes me wonder whether the authors themselves had a “Book Sherpa” (yes, they exist) to help them?

Regardless, these stories are told with love and affection for the tellers. Famous mountaineers from both the present and the past stride through the pages of the book. The authors kindly acknowledge that Sherpa naming traditions can be confusing to outsiders: a family may have more than one child with the same name because they were both born on a Tuesday. And since their community is so central to their core selves, many simply use the name “Sherpa” as their surname.

Far from being an unknown tribe in a distant land, Sherpas now own some of the top climbing companies in the world, leading trips to mountains in the Americas, Europe, and Africa as well as in Asia. One family business, involving three brothers, sponsored their owners to become the first trio of siblings to reach the south pole without using dog sleds or motorized transportation. Some of those companies are still based in Nepal. Others have moved with their owners to locations elsewhere, like Seattle and Salt Lake City in the U.S. Despite the money, though, most of these internationally famous people have remembered their roots. They have invested in infrastructure improvements in their hometowns: schools, hospitals, airports, electricity, sanitation. They have sponsored young boys and girls who want jobs in the climbing business, providing both training and employment. As well as lifting the weights of food and gear for foreign tourists (sometimes lifting the tourists themselves when they became sick or injured) they have carried the responsibility of helping their people with even more care and commitment.

Sherpa reminds us that the mountains and their people were there long before Tenzing Norgay and Edmund Hillary reached the summit in 1953. Many missions had tried before to climb the mountain. All had failed. Many had died. In fact, Hillary and Norgay were the second team on their own mission to make the attempt as the first team did not reach the summit after their oxygen tanks malfunctioned. We’ll never know what might have happened had the other team succeeded, but it is good to know that Norgay and Hillary both agreed that they reached the summit together, they walked the last steps side by side, and each insisted that the other be given equal credit. That kind of partnership in the 1950s between two men from different races was tragically rare.

The photographs in this book are exquisitely beautiful, bringing to life both the majesty of Everest and the amazing people who tell its stories and respect its power. My sole regret in getting a digital copy is the photos. I would love to hold them and pour over them physically. From my tablet screen they lit up the room.

Everest continues to take lives offered in sacrifice to a dream. An avalanche in 2014 killed 16 Sherpas who were preparing the area with ropes and ladders to help that year’s climbers. The next year an earthquake killed almost 9,000 people in Nepal and surrounding countries–including 22 victims of an earthquake-induced avalanche on Everest. The mountain claims its own in many ways: altitude sickness, heart attack, fall. Yet, still people dream of reaching the summit despite, or more likely because, of the risks.

The fact that any are successful is due almost entirely to one small tribe of people who grew up in the shadow of the mountain: the Sherpa. 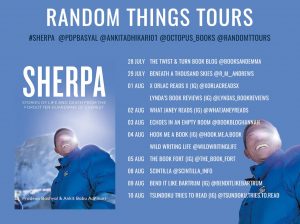 Our thanks to Anne Cater of Random Things for our copy of Sherpa, provided so we could participate on this blog tour. The opinions here are solely those of Scintilla. For other perspectives, check out the other bloggers on this tour.