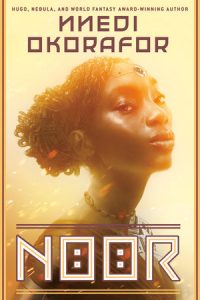 The problem with living in a world where everyone has a recording device is that everything can be recorded and broadcast virtually in real time. Anwuli Okwadili prefers the nickname AO. Rather than referring to her initials, though, to Anwuli the nickname stands for “Artificial Organism.” AO was born with multiple birth defects. Provided with a number of augments that allowed her to live a more normal life, she finds that her life is far from normal. The augmentations that allow her to live also give her some different abilities than strictly biological humans have. This leads to resentment, prejudice, and occasionally violence. When a mob of men decides to attack her, AO defends herself by killing several of them. The fight is recorded, but then edited so that it looks like she was the aggressor and not the victim. She is forced to flee into the desert.

There, she meets a Fulani herdsman who goes by the name “DNA.” DNA does not realize it, but he also is on the run. He and some fellow herdsmen were attacked in a small town, where his friends and most of his cattle were killed. Again, defending himself, he shot one of the attackers. The attack was recorded, edited to make it look like DNA was a terrorist, and the authorities are after him as well.

AO and DNA and his two remaining (and very special) cows flee through the deserts of northern Nigeria. The chase is streamed to the world, the murderess and the terrorist, the wicked woman and the madman. What results is a strong Africanfuturist novel about climate, globalization, bodily enhancements, tribalism and prejudice, and a wee bit of magic as well.

I cannot get enough of Nnedi Okorafor’s writing. She has a beautiful style, creates strong and compelling characters, and has a vivid imagination for the future. Her books are typically set in Africa and feature African characters and African experiences. She draws on the rich traditions and varied cultures of the continent, particularly within Nigeria where her family originally came from and where she has spent a lot of time.

So much sci-fi and fantasy features a European or American focus. But the world is so much bigger and richer and varied than just that. It has been a joy to see newer writers take up the challenge of bringing sci fi and fantasy into a truly global perspective. Why wouldn’t a huge and resource-rich continent play a vital part in a technological future? Africa is full of people, full of energy, full of intelligence, full of history. It is harder to imagine a future without Africa than to imagine one where the continent is a key player.

Noor is a lovely book, relatively short, but full of big ideas and set in an even bigger continent. Part sci fi, part fantasy, all excellence. Another winner from a leading voice in contemporary SciFi.