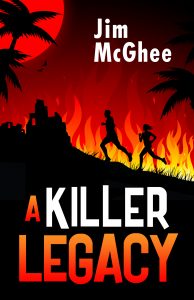 DI Barney Mains has become quite fond of Nice, France. So it is no major hardship when he is seconded to the Nice police force as a liaison to investigate crimes involving English immigrants, mostly wealthy retirees who have purchased homes in the area.

He did not expect, though, that the serial killer he had helped to catch would be brazenly executed in open court by a sniper. Or that the killer had left behind a parting gift just for him, a gift that promised to root out corruption within the police force itself.

Barney also is investigating a series of fires that have been set at homes of English residents. Are these the work of anti-immigrant hooligans? Or is there a hidden meaning to them?

I can already tell that I will be checking out the DI Mains series. A Scottish cop living in the French coast? I’m in all the way! Mains is clever, friendly, and incorruptible. He hates politics, seeks justice, and enjoys French cuisine. I loved the recruitment pitch his friend Jean-Luc gives him: we have a good canteen.

Jim McGhee has a character with staying power. An older cop with a solid sense of right and wrong, he can be counted on to do the right thing. Not always the smart thing, but the morally appropriate choice. 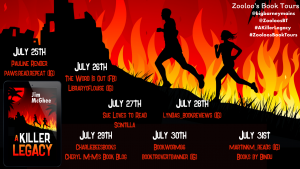 Our thanks to Zoe from Zooloos Book Tours for our copy of A Killer Legacy, provided so we could take part in this tour. The opinions here are solely those of Scintilla. For other perspectives on this novel, check out the other bloggers on this tour.