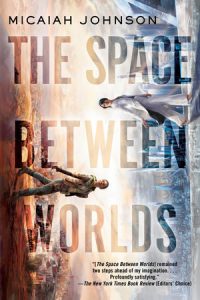 Cara is a “traverser.” Technology exists that allows people to traverse between dimensions, to visit other versions of Earth. Coming from a world with stark distinctions between the white citizens of the city and the browner residents of the wastelands outside, Earth is starved for materials it can source from these other earths. However, only a very few people are able to traverse between the worlds.

Traveling to another world is physically difficult under any circumstances. Traversing to a world where your counterpart is still alive is fatal. Cara is able to do this because the other version of Cara is dead on all but 8 worlds they know of. As long as she avoids those 8 worlds, she will be fine.

Dell is charged with watching Cara, keeping her on task, guiding her back to Earth 0, keeping her alive and safe. She does not traverse herself, but she stays in contact with Cara while she is on these other worlds. Which is sometimes difficult, because Cara does not always play by the rules. Dell struggles with her sometimes wayward charge…not knowing that Cara is deeply in love with her.

Then one day, Cara ends up traversing to a world that is supposed to be safe. A world where her doppelganger has died. There she discovers that nothing is what she thought it was, either on that Earth or on her own. The problem, though, with finding out that everything you thought was true is actually a lie? It requires facing up to the lies in your own life. And Cara has a lot of those.

It occurred to me while reading Micaiah Johnson’s debut novel The Space Between Worlds that the artificial line between “genre” fiction and “literary” fiction is utter nonsense. Any work of fiction (and more than a few works of “non-fiction”) relies on the author’s fantasy. People are created from imagination. Events occur only in the space of words on a page. Conundrums, mysteries, puzzles, all are part of any good story whether the story is listed as a “mystery” or not. All fiction is speculative fiction.

Johnson painstakingly creates a universe that is dark and fierce. Environmental devastation has literally created racial and economic segregation. Cara believes she is making her way in the white world because of her talent and drive. That, and the “luck” of her counterparts dying in hundreds of other worlds. What she learns, almost too late, is that sometimes luck is by design, sometimes talent and drive is less important than the use or abuse that powerful individuals think they can take from it, and sometimes the right thing is neither obvious nor just.

Earth 0 may not be like the world we know, except in every way it is exactly the world we know. Power gravitates toward wealth, systems favor those willing to do whatever it takes to use them, and you just cannot beat “the man.” That is, unless you are a very determined woman who has a secret weapon. After all, she has already died on hundreds of worlds. When you’ve reached the end so many times, you know what it takes to survive.