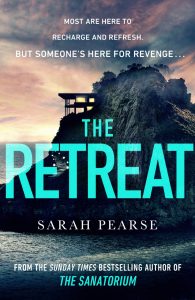 Elin Warner has been on reduced duty since returning from Switzerland. Despite her eagerness to return to her position on the police force, her boss wants to make sure she has emotionally recovered from the trauma she experienced there. When a body is found on the beach below an island resort, it looks like it will be a standard investigation of a tragic accident. As awful as this may be, it is a good way to give Warner the chance to get back into the swing of investigations. Check it out, write it up, head back home.

Until the clues on the scene lead her to suspect this was not an accident. And until a second body from the same group of resort-goers is found trapped underwater in what is almost certainly not a diving accident.

Fortunately, Detective Warner can focus entirely on the investigation. Except her boyfriend was the architect of the resort which is up for an award–an award which would likely disappear if there were a murder investigation. And his sister is the manager of the resort, and she and Warner have never exactly gotten along. And someone is sending menacing Tweets about Detective Warner, including pictures taken of her on the island itself. And the island was the scene of a violent massacre some years before, an event survived by some of the people currently on the island.

Oh, not to mention an event has most of the rest of the department tied up elsewhere so there is no backup. And a terrible storm is coming.

Sarah Pearse is relentless in throwing things at her protagonist. I have not yet read her first book, but the reviews I’ve seen and the hints dropped about it in this book indicate that poor Elin Warner went through the ringer during her trip to the Alps. In this sequel, a beautiful resort on a quiet island serves as the setting for murder, stalking, a cold case that may not actually be cold, and relationship problems. I would say to give the lady a break, but Warner handles it all with aplomb. OK, maybe let’s just say she handles it. Aplomb is probably wishful thinking. But whether the problems are with a difficult case or a difficult relationship, Warner shows the kind of toughness that makes her a survivor.

Which is a good thing to be when a murderer, a stalker, a storm, and a relationship are all coming at you simultaneously.

Our thanks to Anne Cater of Random Things Blog Tours (and to her new right hand woman Tracy Fenton of Compulsive Readers) for our copy of The Retreat, provided so we could participate in this blog tour. The opinions here are solely those of Scintilla. For other perspectives, check out the other participants in this tour.