The very first “road trip” we took after starting Scintilla in 2018 was not a very long trip for us at all. As part of our community’s Central Pennsylvania Festival of the Arts, the BookFest held at our local Schlow Library drew writers and readers from around the region. The last two years, though, the festival and the BookFest were both victims of the pandemic.

The pandemic is still here, but wisely or unwisely things have changed and we have gone back to living as though it were no longer an issue. That includes a return to large community events, including the return of the BookFest. And pretty much like iron to a magnet, if there is a book festival in State College, Scintilla is pulled in!

Perhaps because of the pandemic, the hiatus, or both, the number of authors present did seem lower than it had been. Still, the people who did make it came from around the state with books, stories, comics, and warmth.

Children’s authors were well represented. Denise L. Kaminsky brought her series of “Nittany Lion” books, with the mascot of Penn State University as the star of the books. (One of her books is going to become a birthday present for a certain young grandson, but don’t tell him!)

Not to be outdone in the Penn State love, Jacqueline Materia Nardone has turned her memories and experiences with the PSU Blue Band into a fun book for kids who like music.

Cathy Breisacher brought her three picture books. She is also a librarian and STEM teacher.

And Kristen Taylor, an avid horsewoman, has taken her love of a special horse and turned it into a beautiful book for children.

In addition, BookFest also featured authors in Adult, YA, and Comic genres, including Kara Ballenger, St. Clair Detrick-Jules, as well as Elaine and Henry Brzycki.

Hilary Hauck is also a nearby PA resident, although she was born in the United Kingdom and lived for more than a decade in Italy. Her debut novel was inspired by the true story of three Italian immigrants who made their way to Pennsylvania some 90 years before she arrived here.

And James Stein came with several of his novels in the fantasy and science fiction genres. A resident of northwestern Pennsylvania, his books caught my eye and likely will someday catch my wallet as well.

We truly hope that circumstances do not interrupt the BookFest again, but regardless, at least for this year, it was good to have it back! Looking forward to more BookFest celebrations in the future. 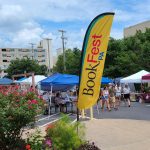