Book Review: A Taste for Poison: Eleven Deadly Molecules and the Killers Who Used Them,  Neil Bradbury 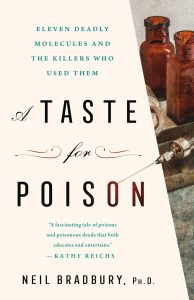 Nonfiction/Science: A Taste for Poison: Eleven Deadly Molecules and the Killers Who Used Them, Neil Bradbury

Readers and writers often joke about the dangerous Google search history of thriller writers. Explosives, armaments, far off places, creative ways to die may all capture the attention of a writer looking for the next challenge for her or his protagonist. And, of course, let us not forget poisons.

Thriller and mystery writers rejoice! Neil Bradbury has written a book that, if you wear a mask and gloves and pay cash at your local bookstore, can protect your privacy and give you a multitude of poisons that have actually been proven effective by real killers! No doubt Neil Bradbury is a very safe person to be around, but he definitely has spent a lot of time exploring different ways that people have chosen to poison other people.

Of course, the dose makes the poison. Or the medicine. Some things can be consumed in small quantities and be harmless or even helpful. Digitalis can regulate a damaged heart. It can also stop a healthy heart. Nicotine is obviously highly addictive and should be avoided, but generations of tobacco users have proven its appeal in small doses. In high doses, it is deadly.

Bradbury dives deeply into the effects poisons have on the body at a molecular level. Most of us can only see the large effect: swallow this and die. But the how is fascinating, if a bit macabre. Some break down cellular walls, causing internal hemorrhaging among other quite unpleasant effects. Others disrupt communication within the body, interfering with electrical pulses or otherwise preventing the brain from controlling the organs. Many poisons are organic in origin: tetrodotoxin famously comes from puffer fish, digitalis from plants. Others are equally natural but inorganic–uranium would be one example. And some poisons are derived from natural sources but have been converted by humans into forms that would never have occurred naturally.

Far from a dry academic exercise in how molecules affect our cells, Bradbury also looks at cases involving actual killers using these poisons on their victims. Some of these cases are quite recent, others go back further in time. Some have been established convincingly in a court and the perpetrators punished. Others have remained unsolved or the killers escaped justice.

Neil Bradbury is an engaging and sometimes humorous writer even in the midst of his dark subject matter. A Taste for Poison was the perfect recipe to sate my appetite for excellent science writing.

Book Review: A Taste for Poison: Eleven Deadly Molecules and the Killers Who Used Them, Neil Bradbury