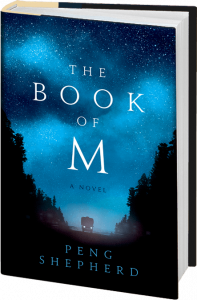 An elephant, it is said, never forgets.

Despite the dubious scientific basis for that aphorism, an elephant’s memory is prodigious. Not usually as good as human memory and we certainly do forget. Still, quite good. We can’t know at this point, though, whether elephants are prone to some of the memory-stealing accidents or illnesses that can affect humans.

In her debut novel The Book of M, Peng Shepherd imagines a near future world where memories disappear. It starts in India. A man standing in the glare of the sun looks down where his shadow should be…and sees only dirt. No matter from what direction or source the light comes, it illuminates him but casts no shadow. Soon a few more Indian residents lose their shadow. At first it is a phenomenon. The world is fascinated and bewildered. Scientists cannot explain it. Soon, though, there is another development: the man begins to lose his memory.

Max and Orly were attending a wedding outside of Washington, D.C. when shadows began disappearing in the United States. Unsure of the cause: contamination, exposure to others, some kind of infection, magic(?), they remain in seclusion at the resort. Gradually the others leave–or lose their own shadows and memories–until it is just Max and Orly.

Then, Max loses her shadow.

By this time the progression has become well known. First, shadow. Then, memory. Finally, death. The means of death, though, is different for everyone. Some just forget how to eat–or how to breathe–or that you can’t walk on air or on water. Usually those deaths only involve the unfortunate individual. Sometimes, though, people forget who their loved ones are and kill them in terror. Sometimes they forget fire is dangerous and set their homes ablaze. Memories do not abandon people in predictable ways. They drop randomly like apples from a tree and there is no telling what the result may be.

While Ory is scavenging for food, Max flees their refuge. She takes a few things: clothes, some matches, and a tape recorder. Ory had asked her to begin taping her memories, her experiences, hoping against hope that somehow this act of mindfulness will delay or possibly defer the inevitable. Although Max does not share his hope, she agrees, and even in leaving she continues to honor his request.

When Ory returns and realizes Max has left, he immediately sets out to find her. He suspects she would have returned to their old home in D.C. so he heads there, first. Max, though, has fallen in with a group heading the other direction, to New Orleans, to a place where rumor has it that a powerful man is helping the shadowless, is working to combat the Forgetting. Her hope, their hope, is that somehow they might make it to New Orleans in time to be helped, to possibly have their own memories restored.

Because, really, who are we without our memories?

I am a husband, father, and grandfather. I know this about myself. I remember my wedding day. I remember the births of my children and my grandchildren. If I lost those memories, if I no longer recognized my wife or my family because of amnesia or dementia, I may still hold those roles in the minds of those who remember me as husband, father, grandfather. But I would no longer know myself as that person. I have no way of knowing what, if anything, would replace that hole in my memory. I can only be certain that the “me” I see in the mirror today would no longer be reflected.

Shepherd brilliantly explores the connection between memory and our very humanity in this book. What part does memory play in our definitions of reality? If memory is suddenly excised completely, such as through a traumatic brain injury, how is that different from it falling out of your life piece by piece? And possibly most difficult, what if your memories cannot be trusted? What if everything you believe to be true about yourself is cruelly, tragically, horribly wrong? Who are you then?

The Book of M is much more dark fantasy than science fiction. It may be a book, though, that instead of making you fear your shadows, makes you fear their absence.