Book Review: It Was Always You, Sarah K. Stephens 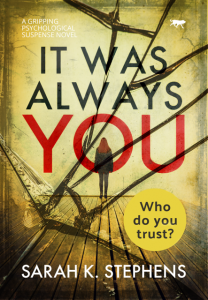 Thriller: It Was Always You, Sarah K. Stephens

Just before our state locked down because of the COVID-19 virus, our local writer’s group held what became our last in-person meeting till last fall with the local lifting of group meetings. Two local authors gave a presentation: Dr. Jennifer Delozier and Sarah K. Stephens, Ph.D. I must say, both of these very intelligent women look like the kind of people you might like to live next door. They both smile a lot. They laugh a lot. Dr. Delozier is a medical doctor who takes care of people. Dr. Stephens is a professor at Penn State University and also a wife and mother. We’ve already reviewed several of Dr. Delozier’s books, so I was eager to dive into Dr. Stephens’ books and see what they were about.

First I read It Was Always You. And if I had not seen Stephens in the flesh, heard her speak, listened to her laugh, watched her smile, this book would have made me very nervous about meeting her! She may look like an ordinary professor. She may sound like a typical wife and mother. But there is a dark side to her imagination and I am glad that it only manifests itself in print.

Morgan is a young professor at Youngstown State University in northeastern Ohio. She has recently begun seeing Justin, a graduate student who is actually a bit older than she is. Their relationship is going quite well, though on occasion Morgan has some doubts. She is not sure, though, whether those doubts are legitimate concerns about Justin or whether they are vestiges of her own deeply troubled childhood.

Morgan grew up in the foster care system. After a traumatic brain injury from being struck by a car, she was taken from her drug-selling mother and shuffled from house to house. Despite the unsettled nature of her upbringing she excels academically and succeeds in getting her Ph.D. and landing a job teaching at her alma mater. Much of the credit is due to the neurologist who guided her through her healing journey from childhood to the present and to the deep friendship of Annie, another foster girl she lived with for some time.

Still, when Justin and Morgan get into an argument, Morgan begins to wonder. Is Justin keeping secrets from her? Is he what he seems to be? Did she actually see him make a fist while they were arguing, or was she misinterpreting his gesture? When Justin suggests they get away together for a romantic weekend, Morgan decides that she must be imagining things and agrees to the trip.

Then the car crashes and Justin is killed in the accident. Morgan wakes up in the hospital. Two detectives want to talk with her–and from the nature of their questions, Morgan realizes that she is suspected of causing the crash and intentionally killing Justin. But her memories of the moments before the crash are blurry. She thinks Justin was driving erratically so she grabbed the wheel–or was he driving erratically because she grabbed the wheel? She thinks he unbuckled his own seat belt–or could she have somehow done it?

Then she gets a text. A text from Justin. And things spiral into a very disturbing web of deceit, manipulation, and confusion.

Stephens has written an amazing story that is very tight and fraught with tension throughout. Morgan is an unreliable narrator–she doesn’t even fully trust herself. Is she telling us the truth? Is it the truth that she thinks is true or the facts as they happened? Is anyone who they seem to be? As past and present collide, her reality is shaken again and again, and we readers are taken along for the ride.

Sarah K. Stephens may look like a mild-mannered college professor. She may laugh like the mother of young children. Behind that innocuous demeanor, though, lies the dark imagination of a thriller writer. It Was Always You is a smart, compelling novel, and I loved it.

Book Review: It Was Always You, Sarah K. Stephens

One thought on “Book Review: It Was Always You, Sarah K. Stephens”