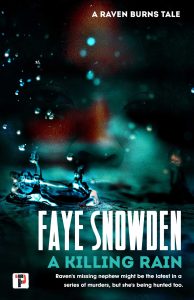 Raven Burns has come home. Not that she feels at home in Byrd’s Landing, Louisiana. She grew up there, true. It was also where her serial killer father had prowled the streets for years. It was where he murdered her stepmother. Byrd’s Landing was where another serial killer had killed her friend, tortured and almost killed her partner, and framed her for his crimes. There were a lot of bad memories for one young woman in that small Louisiana town.

Byrd’s Landing was changed when she returned. Her former partner on the police force had left and started a restaurant. Her brother was soon to become a father to a teenager–a child he never knew that he had. And she has changed, from homicide detective to stone-cold killer (even if the person killed was himself a murderer). One thing has not changed, though. Byrd’s Landing still seems to grow more than its share of murderers.

Teenage boys are being slaughtered in Byrd’s Landing. Their bodies are meticulously washed and then left in obvious places where they will be found–and presumably a message will be received. There is no obvious connection between the boys, no apparent connection between the locations other than each represents a place of authority within the community, and no clues left by the killer. The police are not getting anywhere, so the chief calls on his former detective to help investigate.

Burns would probably have an easier time investigating if her dead father’s voice would stop giving her advice. She feels compelled to join the case, though, to stop the deaths of these teenagers. A case that becomes much more personal when her brother becomes the chief suspect–and her nephew becomes the latest to disappear.

Raven Burns is hard to like and impossible to ignore. She is a walking mass of contradictions: a homicide detective who murdered a man, a troubled woman with the voice of a serial killer in her head, someone willing to do what needs to be done and willing to push others beyond their breaking points to get them to help. She alienates friends, family, other officers, long-time acquaintances. Yet she is also determined, relentless, and reckless in her pursuit of the murderer.

A Killing Rain is a taut story full of big city tension and small town gossip. The characters are as delightful as sweet tea and as spicy as a Cajun gumbo. Racial tensions, class distinctions, and decades of mistrust cloy like the humidity of a bayou summer’s day. Faye Snowden has not just written another mystery. She has written a reminder that a sleepy southern town may hide a number of harsh realities under its genteel veneer. 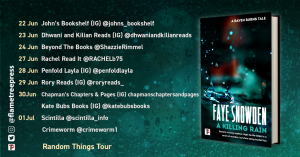 Our thanks to Anne Cater of Random Things Blog Tours for our copy of A Killing Rain, provided so we could participate in this blog tour. The opinions here are solely those of Scintilla. For other perspectives, check out the other bloggers on this tour.