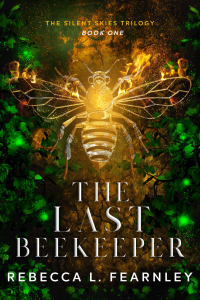 Sometimes you learn the most unexpected things from books. For example, I learned through The Last Beekeeper that an important part of a young hero’s arsenal is an aunt with a rolling pin.

Solma is a young guard for her village. Despite being a teenager, she has already been promoted to sergeant and is nominally in charge of a team of other teens who protect the village from wild animals and the occasional raiders from outside the village. Nominally, because her staff sergeant, Maxen, is the son of the village Steward, and rank does not trump inheritance in their community.

Most of the people are starving. Crops are poor. Diseases are killing the orchards. And pollination is difficult to impossible. For the planet Alphor is one without insects. For 100 years or more, almost no insects have been seen anywhere. Solma once saw a beetle. She was about four-years old and her father caught it and showed it to her. But the beetle was set free, her father and mother died, and she was left to care for her much younger brother, Warren.

When Warren disappears, Solma becomes frantic. She searches throughout the village until she finds him on the outskirts of the forest. There he is enraptured by something he has found. A bee. The first bee seen in a century.

They must lie. In a town where lies lead to punishments or even exile, a town too small for keeping secrets, Solma and Warren try to keep the biggest small secret ever. A bee has returned to Alphor.

Rebecca L. Fearnley writes with both passion and compassion. Solma is a very complicated young woman. Young enough to dare to love a boy forbidden to her. Old enough to care for her younger brother. Loyal enough to be promoted to sergeant. Nervous enough to keep her brother’s secret. Trusting and suspicious, eager and tentative, Solma is a very well-crafted teenage character. In those confusing years surrounding puberty, when every emotion is a GREAT BIG EMOTION, when every decision is a LIFE CHANGING DECISION, when every mistake is THE END OF THE WORLD, Solma tries to navigate her difficult world. She often fails, she often trusts the wrong people, she often jumps to conclusions that are not borne out by the facts. She is pretty much like any teenager, except she is carrying a secret that could be the salvation of the world or the destruction of her family. And she deals with this pressure with all of the judgment, wisdom, and deliberation that teens around the world are noted for.

In other words, it’s a very good thing that an aunt with a rolling pin has her back. 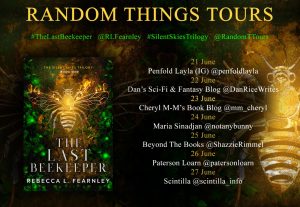 Our thanks to Anne Cater of Random Things Blog Tours for our copy of The Last Beekeeper, provided so we could review it for this tour. The opinions here are solely those of Scintilla. For other perspectives on this book, check out the other bloggers on this tour.