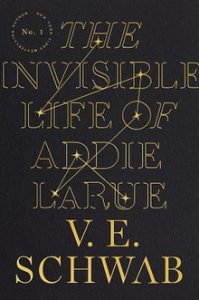 Addie LaRue made a deal with a devil. Those typically do not turn out well. A young woman in 1714 France calls upon a god of the night to protect her from being forced into a marriage she does not want. The god/devil, whom she eventually calls “Luc,” gives her immortality in exchange for being forgotten. No one remembers her after they lose sight of her, whether she just goes into another room, they turn their backs on her, they fall asleep. She may live forever, but in people’s memory she is little more than a shadow.

Early in her immortality, Luc appears to her annually and asks her to give him her soul. Every year, she refuses. Eventually his visits become more infrequent, but the character of the visits changes. She learns how to bargain with the devil, how to keep her humanity in spite of her separation from the relationships that keep us human, how to impose her presence into works of art, paintings that feature unknown women with the same constellation of seven freckles that she has on her face, music that celebrates the passion of a woman who remains unknown and mysterious.

For Henry, though fully human, has his own story that intersected with Addie’s before they ever met. And Luc is not done toying with his pet human. In fact, he is just getting started.

Nominated for the Locus award, The Invisible Life of Addie LaRue is mesmerizing and bold. V.E. Schwab writes beautifully. Her characters are full of heart and grace, villainy and chivalry, fully human (Addie and Henry) and fully not (Luc). The juxtaposition of 2014 New York City and 1714 rural France effectively shows what a life of 300 years might demand; new languages, new technologies, new opportunities, new lands. And total, constant loss. No friends, no family, no love. Sex, sure, but then forgetfulness and confusion the next morning. It may be a life, but it’s no way to live. How can you buy property? How can you buy groceries? How can you hold a job? Addie LaRue’s body lives forever, but her memory disappears in the breeze.