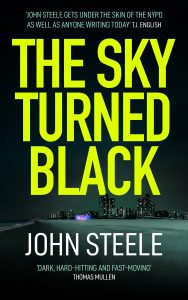 Life is somewhat better for Officer Callum Burke, now with the NYPD. After his crucial role in bringing down leaders of both the Irish Mob and a Hong Kong Triad, he has found a place with the NYPD Brooklyn narcotics division. His estranged wife and their daughter live in Cleveland, just a few hours by bus from his home in New York. His friend, Georgie Ruiz, has also moved to the same division. She has been promoted to detective while he is still working his way up from officer. Still, he has a mentor in the hierarchy, a friend in the department, and a job he believes in.

None of which explains the anger that drives him constantly to the edge, both with suspects and with fellow officers.

Callum Burke is damaged goods. Smart enough to avoid mental health screenings, he smokes too much and drinks too much. Way, way too much. Burke is hoping to inebriate his demons into quiescence. It doesn’t always work, as the bruises he hands out reveal. Usually Georgie can bring him back from the edge. But Georgie has her own family with their own problems, and she cannot be there all the time.

Burke and Ruiz’s previous boss, the man who worked with them to bring down the Irish and the Hong Kong mobs, reaches out to them with an offer they literally can’t refuse. He is borrowing them from narcotics to help him with a case in organized crime. Two Russian gangsters are involved in a turf war and people are dying. He has a CI close to one of the gangsters, but as things get hotter he needs some extra people he can trust.

The NYPD are not the only ones interested in the gangsters, though. The FBI is also watching and they don’t play well with others. And a freelance killer working for one of the gangsters has his own scores to settle, including one with Callum Burke.

And somehow, he knows more about Burke than anyone outside the police should know.

Is he dangerous enough to scare a Russian killer? A killer with his own demons to exorcize, a killer whose past in some ways mirrors Burke’s own, a killer who sees in Burke a kindred spirit–and recognizes the danger that entails?

Steele has again turned out a powerful and dark book. Part of the appeal of Batman is the darkness warring with the light. That same dynamic is present in Steele’s books. Burke lives on the knife’s edge between darkness and light, between surrendering to the anger that threatens to consume him and between striving to become the man, the father, his daughter deserves. As one event leads to the next, as one chapter segues into another, you are never certain which way Burke may lean. One thing you can be certain of: John Steele has written another intense and brilliant book. 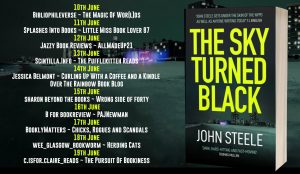 Our thanks to Rachel Gilbey of Rachel’s Random Resources for our copy of The Sky Turned Black, given so we could review it for this blog tour. The opinions here are solely those of Scintilla. For other perspectives, check out the other bloggers on this tour.