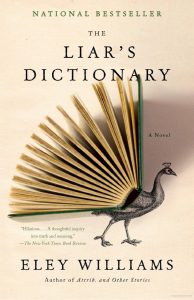 Although it may sound like an obscure warning for alpine hikers, “mountweazels” are made-up words hidden in dictionaries to preserve their copyright. If the publisher of a dictionary suspects plagiarism on the part of a competing dictionary, they can turn in that book to the part of an alphabet where they have hidden their fictional word. If the dictionary carries a definition for, say, a “swankrabbit: (n) a rabbit or other pet dressed up in human clothes,” then they can know that the definitions and words were copied directly from their page, complete with the mountweazel “swankrabbit.” (After making up the word I took a moment to look it up just in case. As it so happens, there is a YouTube channel by the title “SwankRabbit.” I have no idea whether it involves nattily attired pets.)

Other reference books include their own types of mountweazel. The word, in fact, derives from a faked encyclopedia article about a fictional woman with the surname “Mountweazel.” But the focus in The Liar’s Dictionary is on words in a dictionary and not just one or two hidden away to protect a copyright.

Mallory is an intern at Swansby’s, a publishing house known mostly for what it did not do. It did not publish its comprehensive dictionary of the English language, despite the years and funds invested in the project. More a leftover remnant known only for its lovely building (at least the ground floor), Swansby’s is now run by the last remaining heir of the family, David Swansby. He has decided to convert the dictionary, or rather the notes remaining from the never finished dictionary, and digitize them. To that end he has brought in an intern: Mallory. Mallory is actually the only employee of Swansby’s, and as David is rather obsessively taken with online chess, she is the only one working on the dictionary. After some time, David gives Mallory a very specific job. Someone in the original staff had inserted numerous made-up words, mountweazels, into the dictionary. The definitions were clearly written by a professional, the words themselves would escape notice of people not looking for them, yet they clearly compromised the value of the final product. (Not that there was a final product, but in the event that there was one….) Mallory is charged with finding and removing these interloping words.

There’s a lot more going on in the book than the obvious. Bomb threats in the present. A sort-of love triangle in the past. Coming out in the present. But throughout the emphasis is on words. The love for words, the love of learning about words, even the love of making up new words. Eley Williams has an amazing vocabulary, amazing enough that I kept my online dictionary handy while reading the book. Many of the words were listed as obscure, or specifically Scottish, or the argot and jargon of professionals. Amazing enough that some of the words she uses could not be found in my online dictionary searches–might they be mountweazels themselves? I daresay they might, though the absence of proof is not proof.

Regardless, The Liar’s Dictionary is fun, whimsical, 26 chapters not coincidentally headed by different English (and some maybe not yet English) words beginning with A and continuing consecutively to Z. For people who like wordplay, enjoy etymology, are fascinated by dictionaries, or who just like a delightfully told story, this is a terrific book.

You may want to keep a dictionary handy, though.