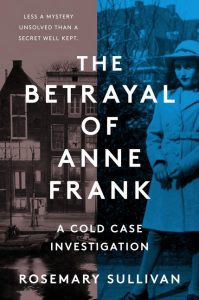 The mystery of the Frank family’s betrayal has puzzled historians for decades. The story itself is quite well known. The Frank family, a Jewish family in Amsterdam during World War II, faced the prospect of their oldest daughter Margot being sent to a “work camp.” For Jews sent to those work camps, it was a one-way trip. Those who survived the work camp ended up in a concentration camp.

Otto Frank decides to hide his family in a small apartment over the business he once owned. He was forced to sell it by the Nazis. Fortunately a very close friend bought the business and agreed, along with some other employees and friends, to help hide the family. Eventually there were eight people hiding in this very small apartment. Sheets were hung up to make separate “bedrooms.” For two years the families hid in the apartment. Food was provided by the friends and employees who risked their lives to provide them with necessities and communication.

During that time, Anne kept a diary. She aspired to be a writer when she grew up and determined that keeping a diary would help sharpen her skills. Sadly, Anne never grew up. A local Nazi officer received a tip that people were hiding in the factory. They discovered the hidden door to the apartment, and arrested all of the people hiding there along with two of the helpers.

Seven of the eight hidden people died in the concentration camps. Only Otto Frank survived. When he came back to Amsterdam, he discovered that his former secretary, Miep Gies, had found Anne’s diary and kept it hidden to return to her. Instead, she gave it to her father. Several years later, Otto determined to make his daughter’s dream come true posthumously and published the diary.

The question that has never been conclusively answered is, “Who provided that tip?” There are a number of possibilities but no “smoking gun,” no documentation that a reward was paid for the information or the name of any informant. As the world approached the 75th anniversary of the Frank’s arrest, an international team was brought together to investigate this coldest of cold cases. Based in Amsterdam, the lead investigator was retired FBI agent Vince Pankoke. He helped focus the investigation using modern tools which were unavailable to previous queries.

The conclusion they reached has not been universally accepted and I am in no position to judge. What I can judge is that this is a powerful and brilliant book about a multi-year and intercontinental search for the truth. Rosemary Sullivan really brings to life both the time during and after the war and the time of the investigation. Documents, photos, and records from the era were collected wherever they could be found: Netherlands, Germany, Switzerland, the U.S., Israel, Canada. Interviews were conducted with the children and grandchildren of people from the time of the war – the principals had all passed. Data analysis of records revealed a number of things that had been forgotten. Eventually the team narrowed it down to four suspects, then determined that one man in particular was probably the person who had revealed the address.

What’s important to remember is that this was a horrible time. People did what they had to do in order to survive. One could easily say that Otto Frank’s decisions were more noble: try to save your family by hiding. Unfortunately his decision did not work; his entire family died. Others tried to save their families by escaping. Some were successful. Many were not. And some tried to save their families by betraying others. The man identified by the team as the likely source of the tip was a man trying to do just that. With the advantages of distance, hindsight, and peace it is easy to judge. Another metric to use, though, is that this man did successfully bring his family through the war. Was the price too high? Which one of us wants to be in his shoes?

More Jews from the Netherlands died in the camps than from any other country in western Europe. “Of the 140,000 Jews living in the Netherlands, 107,000 were deported and only 5500 returned.” I struggle to wrap my brain around those numbers. Would I betray another family to save my own? I know what I want to say. All that I will say is that I hope no one reading this ever faces that decision.

Miep Gies, the woman who saved Anne’s diary hoping to give it back to her, is quoted in the book as saying, “Prejudice starts when we speak about THE Jews, THE Arabs, THE Asians, THE Mexicans, THE Blacks, THE Whites. This leads to the feeling that all members of each such group think and act the same.” Her point was that Anne’s diary should teach us that prejudice must be stopped in the beginning.

Fundamentally, the Franks were not killed by the person who revealed their hiding place. They were killed by Nazi prejudice. Prejudice killed millions of Jews, Roma, homosexuals, and those willing to try to help them. Prejudice continues to kill people every year. Let’s use the lessons of the past to stop the atrocities of the present in the hopes that we can all live in a better future.