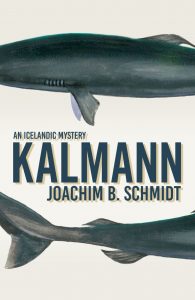 Kalmann is an ambitious and challenging book. It is a vivid first-person narrative that takes very unexpected directions.

Kalmann is a young man in his early 30s who tells the story from his perspective. His perspective is a rare one in fiction. Kalmann has a diminished mental capacity. He can read, but has never read a book. He has a deep understanding of nature, of local geography, and of his place in the community. Kalmann lives on his own in his small village on the north coast of Iceland. He makes his living by fishing for Greenland sharks, gigantic fish that live in the bottom of the sea in the cold and dark. From the shark meat he makes a local delicacy, much of which he either eats himself or gives away.

One day Kalmann is hunting for an arctic fox that has been hanging around the village. He discovers something disturbing: a large pool of blood near the top of a hill. A local businessman who lived near the spot has gone missing. Kalmann speculates that it might have been a polar bear. They are quite rare but do occasionally swim or ride ice floes from Greenland to Iceland. Police investigate, searchers look for a body, but the man seems to have fallen off the face of the earth. Or, as Kalmann also wonders aloud, he has become fish food?

Kalmann takes his role as the town’s self-appointed protector quite seriously. He patrols the area with a cowboy hat, sheriff’s badge, and an old gun that may not even be loaded. Still, he is a fixture in the community, cared for by many and scorned by others.

Questions remain unanswered for most of the book. Where did the missing businessman go? Is his disappearance related to the presence of foreigners? Did some decisions he made before his death prompt a local to exact revenge?

Joachim B. Schmidt has done an extraordinary job of balancing the simplicity of Kalmann’s mind with a complex and involved plot. Kallman’s voice is unlike almost any other I have read. Schmidt does not pity or mock his character. He lets Kalmann tell his story in his own way. We learn that Kallman does not think of himself as “simple” or “dumb” or any of the other names he is called. He does understand that his view of the world is quite different than most others. His grandfather understood him, his mother loved him, and he has mementos from the father he only met once. Now, though, his mother has moved to another town because of her job, his grandfather is in a home for dementia patients, and he is trying to make it on his own. Since he is a grown up, no one can tell him not to eat Cocoa Puffs for breakfast…and dinner. No one can tell him what shows to watch. No one can tell him not to patrol the community in his cowboy hat and LA County Sheriff’s badge and his antique pistol.

As challenging as it must have been to write, translator Jamie Lee Searle had an epic responsibility to bring this story, this voice, this perspective into English. Somehow, the collaboration has worked magic and created an incredible book. 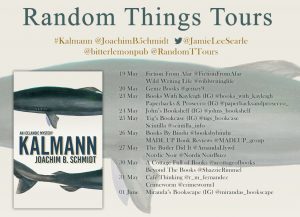 Our thanks to Anne Cater of Random Things Blog Tours for our copy of Kalmann, given for our participation in this blog tour. The opinions here are solely those of Scintilla. For other perspectives on this book, check out the other bloggers on this tour.