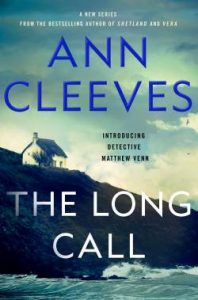 Detective Matthew Venn stands in the foyer of a church, listening quietly to the funeral service inside. Although the service is for his father, he is confident his presence would be quite unwelcome. Devout members of a small, strict, evangelical sect, Venn’s parents all but disowned him when he renounced his faith, publicly, while in college. Since then he has given them more reason to despair: he has married a man.

Slipping away from the service unnoticed, he gets a call from another detective. A body has been found on the beach very near the house he shares with his husband, Jonathan. A man with the tattoo of an albatross on his neck lay in the sand, stabbed. Soon the investigation reveals a troubled man who let a room from his social worker and a local artist, a woman who works in the studio that is part of Jonathan’s community center. Perhaps more disturbing than the man’s past was his current behavior: he had apparently been seeking out a young woman with Down’s syndrome who also spent time at the community center, riding the bus with her and plying her with candy. Although he had not done anything to Lucy, everyone is concerned that he was possibly grooming her for something. Everyone except Lucy, who saw the man as her friend.

Ann Cleeves has been providing creative mysteries with complex characters for some time. Previous series of hers, Shetland and Vera, not only have dedicated readers but have turned into long-running television shows. The Two Rivers series is also came to television at the end of October, 2021.

I suspect it will also be a hit. Matthew Venn is a fascinating detective, both as an investigator and as a person. Growing up evangelical is not easy. Believe me, I know. Growing up evangelical with active doubts about the faith and the increasing realization that you are gay would be torturous. Venn did not just “lose his faith” as evangelicals describe it. He lost his family, he lost his view of how the world works, he lost his place in a community that had previously welcomed him, he had to rebuild his identity during a very vulnerable time. Although he has done that successfully, there are still echoes of the trauma from that period of rejection and transition. These echoes grow louder as the investigation involves members of his parents’ insular faith community.

Cleeves holds her secrets close. This is a book that reveals clues as the detectives themselves learn them, that opens doors only when the detectives are ready to walk through them. Many of the insights come from the detectives’ own insights and backgrounds, and they share them with the reader as they arise. Several aspects of the final resolution came as a surprise to me, but immediately made sense in the context of the story.

Fans of Ann Cleeves will love this new set of characters. People less familiar with her work may also get drawn into these relatable people with complex cases and even more complex relationships.