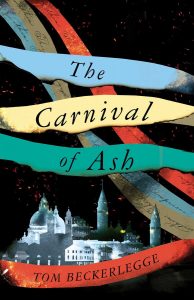 As dawn breaks over the city of Cadenza, a gravedigger wheels a body into the graveyard of a church. To Ercole’s surprise there is already someone in the grave, someone whose movements and words indicate that he is not quite ready for interment. Carlo Mazzoni has come to Cadenza to make his name as a poet. After a day and night where everything seems to go wrong for him, he has decided to lie in the grave and wait to be buried.

So Ercole throws shovels of dirt on him.

Deciding fairly quickly that being buried alive is actually not what he wants to do, Carlo clambers out of the grave, poem in hand, and begins a series of stories that are less about any one person and more about the gradual fall of the City of Poets. Cadenza took pride in being led by poets. A poet was the head of government, albeit a poet unafraid to kill his enemies and innocents alike. Other poets made up the ruling council. Churches were in the town, but the real religion was poetry. Write memorable verse and your fame and fortune were secured. Failing that, you could live in the shadow of a famous poet as one of his fidele. Women were not considered worthy of writing poetry–this was hundreds of years ago in Italy–but a few could make a good living as “ink maids,” writers of letters to wealthy patrons that reflected their patrons’ darkest desires.

Thomas Beckerlegge’s Carnival of Ash is difficult to categorize. It is beautifully, lyrically written, as becomes a tale of the City of Poets. It could be considered as a series of interlocking short stories, with characters from one “canto” showing up in future cantos, often countering things that had been previously explained one way with very different perspectives later. People who are introduced one way are sometimes completely redefined in later chapters.

It has been described as a fantasy, and I suppose that’s not entirely inaccurate. It is more of an alternate history, the dissolution of a non-existent city ruled by a non-existent form of governance. There are elements that could be considered supernatural or other-worldly, but it is not the sort of fantasy with magicians or elves or gods. Probably literary fiction is the best home for it, but it is definitely not the typical fare for that genre, either.

What remains constant is the city. Cadenza believes itself to be THE CITY OF POETS, and as the city of poets it carries the weight of its own expectations. A poet should lead the city, so when the city needs a business manager or a military leader it is ill-equipped to find a warrior poet or a businessman poet. Plague does not respond to pretty words. Outside enemies cannot be repelled by well-aimed verses. As problems within and threats without grow, the city is left more and more speechless, incapable of responding to existential threats that cannot be talked away.

Carnival of Ash is a very different sort of book. It definitely is not for every reader, but the more I read the better I liked it. The characters are fascinating, contradictory, both failing and succeeding to live up to their own expectations of themselves. When the book closes on the same gravedigger who opened the book, I realized that I had truly been taken on a fantastical adventure. 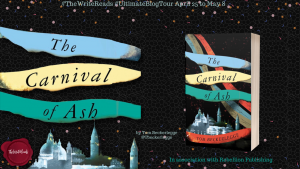 Our thanks to BBNYA and The Write Reads Blog Tours for our copy of Carnival of Ash, given so we could participate in this tour celebrating the top ten of BBNYA 2021. The opinions here are solely those of Scintilla. For other perspectives, check out the other bloggers on this tour.

One thought on “Blog Tour: Carnival of Ash, Thomas Beckerlegge”