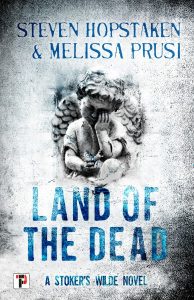 Bram Stoker and Oscar Wilde are at it again. Or in this book, more Stoker than Wilde. Oscar Wilde is busy planning his wedding, a wedding that promises to be the most significant London social event of the year (or decade? century? ever?). While Wilde focuses on dominating the London social calendar (and hopefully tamping down rumors of his own homosexuality), Stoker goes with an expedition to find a scientist rumored to be raising the dead. They find his evil lair (that’s just fun to write) but he is missing and presumed dead.

Meanwhile London society is becoming enamored with a young medium who can actually speak with the dead. At first she is participating in a scheme to fake contact with the dead, complete with children hiding in the room to make noises and pretend to be spirits. Then she meets a woman, her long missing mother, who unlocks her latent abilities and the seances move from fraudulent to frightening.

As the plot progresses (using the literary technique of diary entries by different characters telling the story from their own perspective and in their own voice), the plots come together and our protagonists find themselves facing enemies old and new. As befits a series with vampires and other things that go bump in the night, the inconvenient fact that some of those enemies were dead at the beginning of the novel does not reduce their menace.

The husband and wife writers have put together a series that is fun, whimsical, pays homage to both the Victorian horror genre and to these two authors in particular, and does not take itself too seriously. It is charming, not too scary, and quite clever. I am not sure just how far they intend to take their series, but I am along for the ride. 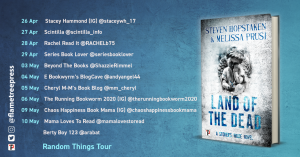 Our thanks to Anne Cater of Random Things Blog Tours for our copy of Land of the Dead, given so we could participate in this blog tour. The opinions here are those of Scintilla. For other perspectives, check out the other bloggers on this tour.