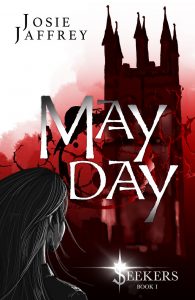 I went into this book cold. I had no idea what it was about, mostly because I was buried with other work and just did not do my research going into it. So when it started with a body falling from the heights of an Oxford tower even though some officers were on duty, I’m ready for a crime novel. And I did get a crime novel, but not like one I’ve ever encountered.

First of all, both the murderer and the officers are vampires. The victim is human. Most British are human, but the vampires live among them in secret with their own leaders, their own laws, and their own “seekers” (similar to human police officers).

“Jack” is one of those seekers. She is young for a vampire, living some 20 years as a human and now 40 years as a vampire. Most of her colleagues are much older, some of them hundreds of years old. Vampires are essentially immortal, recovering quickly from injuries that would kill a human, impervious to most drugs and poisons and illnesses. Still, if the humans were aware of them, an open war would be costly to both sides. Therefore, the number one law for vampires: do not attract attention to vampires. Draining a body, removing internal organs, then throwing it off a tower attracts attention. Therefore a lot of people are looking for the culprit.

Let’s get one thing out of the way immediately. This is an excellent mystery. If there were no other elements to this and it was just a police procedural, it would stand out. There are twists and turns, the killer is, if not unexpected, at least not painfully obvious from the very beginning, and Jack’s tenacious search for the murderer is compelling. There are cops with a mixture of interest in their job and a mixture of corruption in their actions. And there are frank and fascinating conversations about the limits of law and justice and whether a homicide is ever justifiable.

As a young(ish) vampire, Jack is still not entirely familiar with vampire history, culture, hierarchy, and even biology(?). She learns unexpectedly that a “mark,” a scent indicator left on a lover, is persistent and obvious and has side effects. She learns that a terrifying myth cum nursery rhyme from her childhood is not a myth. She learns that capturing a murderer, particularly someone who murdered a human, is not nearly as important as keeping the vampire’s existence a secret. And should that murderer be someone in the vampire heirarchy, then it legally doesn’t matter as long as the secrets are kept.

Jack takes us with her into a world that is dangerous, fun, exciting, dark, and complicated. Loves that lasted for centuries can fail but in a small community they still have to find ways to coexist. Alcohol itself can make a vampire drunk…mix it with blood, though, and you have a very potent cocktail. These vampires are sensual, ferocious, dangerous. Even ordinary vampires fear crossing those millenia old leaders for whom “the long game” may take centuries to play out. Vampires may be nearly indestructible, but immortality can be just another word for hell on earth. 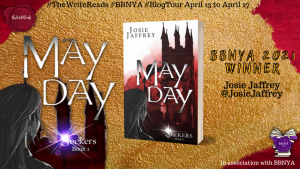 Our thanks to BBNYA and The Write Reads Blog Tours for our copy of May Day, given so we could participate in this tour celebrating the top ten of BBNYA 2021. The opinions here are solely those of Scintilla. For other perspectives, check out the other bloggers on this tour.

One thought on “Blog Tour: May Day, Josie Jaffrey”