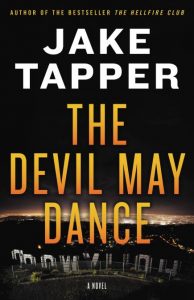 It’s a real shame that Jake Tapper is such an underachiever. Award winning journalist, CNN host, hard-hitting interviewer, he has started writing novels in his spare time. Maybe someday he’ll decide what he wants to be when he grows up. (Note to editor, please make sure to use the sarcasm font for the above paragraph.)

NY Congressman Charlie Marder and his wife Margaret are hanging around in Los Angeles with Frank Sinatra, Dean Martin, Sammy Davis Jr., Peter Lawford and other members of the “Rat Pack,” and some of Sinatra’s friends from the Chicago mafia. Hanging out in a cemetery very early in the morning (for reasons explained later in the novel) Marder is accidentally cut and requires first aid. As he waits beside the car, Margaret goes to the back to get the first-aid kit from the trunk.

There is a dead woman lying in the trunk.

As in his previous novel, Tapper weaves fact and fiction together in a fascinating amalgam. Charlie and Margaret Marder are fictional. But the majority of characters they interact with were quite real. Bobby Kennedy. L. Ron Hubbard. The Rat Pack. Judith Exner. Sam Gianconna. Tapper has done extensive research, even including conversations between some of these people which were transcribed from actual recordings or interviews at the time (simply adding in Charlie or Margaret to listen to the conversation between the others). He even includes details from people I had never heard of but were part of this milieu such as George Jacobs, an African-American man who worked in Sinatra’s home for years.

Power and money, fame and personalities, sex and alcohol. All of these are present in abundance in this book. The quite tawdry lifestyle among the Hollywood elite was relatively unknown to the larger public in the early 60s, but those days of the press deciding to keep a lid on the sordid affairs and addictions and narcissism of the rich and famous are, well, probably not over but certainly reduced. Certainly the peccadillos of the Rat Pack are now public, including the friendships between Sinatra and members of the mafia. Many of the relationships (of all sorts) that Jack Kennedy had with Sinatra, Exner, Marilyn Monroe, and others have been exposed in the decades since his murder.

Still, creating fictional characters and a fictional crime and inserting them seamlessly into a historical era filled with extremely well-known figures is an extraordinary challenge. The Marders are a terrific team, though they struggle through their own issues especially as Charlie’s drinking escalates out of control. Somehow Tapper manages to create a fascinating mystery that literally feels like it could be a story on a CNN report.

I’m sure his parents hope Jake Tapper someday makes something of himself. If his day job doesn’t work out, this novel writing might be a decent fall-back.