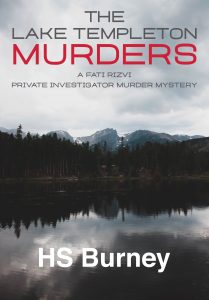 This debut whodunnit from author H.S. Burney is quite solid. It checks many of the boxes for a traditional mystery: world-weary PI helping the police, possibly corrupt government officials, twists and turns and red-herrings to delay the reveal of the bad-person, seemingly innocent victim with a secret past that may or may not have contributed to her murder. In checking those boxes it definitely appeals to the traditional hard-boiled mystery lover in me.

It also checks other boxes that set it apart. A murder in Canada. (We Americans like to think that Canadians are too nice to murder anyone, or at least they would apologize for the bother when they did so.) (Just kidding, Canada. We know you can be as mean as anyone other than your southern neighbors.) A PI of color – most fictional private investigators are lily white. A female private investigator, only slightly less unusual than finding a non-white PI. And a generally cooperative relationship between the PI and the police, which may be the Canadian influence at work since part of the American trope at least is that the PI and the police barely get along and only reluctantly cooperate.

Fati Ritzvi is a first generation Pakistani-Canadian who caught the bug for investigating at a very young age and dropped out of college to go to the police academy. After a short career chasing criminals and annoying superiors, she started her own private investigations firm so she could choose her own cases, set her own rules (usually following the law, at least most of the important laws), and avoid seeing her parents who disapproved of her career choices and her singleness. Growing up in a Muslim home (though she is essentially non-religious) gives her another point of difference from your typical paper PI.

When she hears of a murder on a quiet shore of Vancouver Island, she decides to take the case. No one has actually hired her, but she knows the police department in the area is overworked and fears that the case may get less attention than it should. Since the department head is an old friend and mentor, she believes she can offer her assistance without getting too much negative pushback. She is right, and she begins working the case as a police consultant.

The young woman was a local city treasurer. Her boss, the mayor, accuses her of stealing government funds. Her boyfriend, also a city official, is aware of the accusation but says he was hoping to help her return the money. As Ritzvi digs deeper, she finds that the murdered woman had a past in a doomsday cult. She was the only survivor of a mass suicide by cult members. An expose of the cult featured her story, though not by name. Could that have come back to haunt her? And what about the high ranking provincial official who keeps appearing in the background…could she have orchestrated things?

There is no shortage of suspects, but Ritzvi begins to realize that her mind is not 100% focused on the case. The police liaison assigned to her is tall, dark, and very handsome, and although he is entirely professional, she is quite willing to lay professional boundaries aside if he were willing.

The Lake Templeton Murders features a fascinating and complicated protagonist, some delightful characters who seem likely to continue with the novels, and a simmering romance that may only simmer for a variety of reasons. I found it to be a very winning combination. 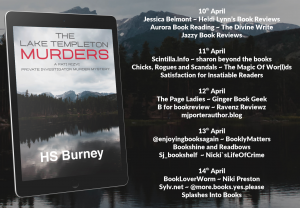 Our thanks to Rachel Gilbey of Rachel’s Random Resources for our copy of The Lake Templeton Murders, provided so we could provide our honest opinion as part of this blog tour. The opinions here are solely those of Scintilla. For other perspectives, check out the other bloggers on this tour.