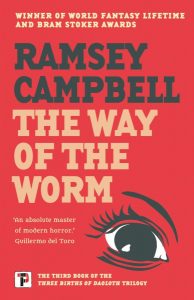 Fiction/Horror:  The Way of the Worm, Three Births of Daoleth Book 3, Ramsey Campbell

I may never again think of the number “three” without a chill. And I could go the rest of my life without seeing another ouroboros.

Dominic Sheldrake’s wife, Lesley, died recently. Their son, Toby, and his family are the only people left in Dominic’s family and he turns to them in his grief. To his dismay, though, they try to get him involved in their church.

Although Dominic is an unbeliever, his dismay is not from it being just any church. Rather, it is the church they are part of. The Church of the Eternal Three would not be recognizable as any Christian variant. Following the teachings of an obscure and mystical figure, it is led by the Le Bon family: grandfather Christian, his daughter Christina, and her son Christopher. Dominic has had a long history with this family. As a child he was pulled into Christian’s sphere, enamored with his teachings. As a father, he rescued his son from a center run by the family. Now, many years later, his son has returned to them as a leader in their church, along with his wife and their 5-year old daughter. Although they claim it is merely a place of meditation, the church’s fascination with the ouroboros icon (a snake consuming its own tail) should be a red flag to almost anyone.

From the Eternal Three to the three Le Bons, from the three members of his son’s family to the “Tremendous Three” as Dominic and two of his friends dubbed themselves many years before, to the Church of the Holy Trinity to which Dominic’s friend Jim still belongs, the number three crops up in the book time and time again. Most of the time it is warning of something bad to come. Even the reunion of the Tremendous Three has an unexpected denouement. (I suppose since this is book three of a trilogy, I might have caught onto the symbolism sooner than I did had I read the two previous books.)

Almost all of the story is told from Dom’s perspective. There are times where we cannot be certain that his perspective reflects reality as it is. There are other times where he perceives a reality that others cannot see. His long association with the Le Bons (who have previously gone by the names “Noble” and “Bloan”) both lets him see them for what they are and blinds him to what they are. He is far from an impartial participant. He despises them, he fears them, he obsesses over them, he worries constantly about the effect they have on his son and daughter-in-law, he especially worries about the effect they may have on his granddaughter Macy. Whether those fears and obsessions are justified…well, read the book.

Ramsey Campbell is probably a very nice person. His book, though, is as creepy as anything I’ve read. The Le Bons are occultists. That makes them potentially dangerous. It may not make them wrong. Someday the end of the world may be successfully predicted, by accident of timing if not through any prescience. As Dominic tries to sort out truth from lies, fact from fiction, reality from myth, accuracy from demagoguery, we get drawn more and more into the world he sees. That world looks very much like our own through a funhouse mirror. Warped, distorted, dangerous, and apocalyptic, it is a world that damages everyone who sees it.

I do think I would have enjoyed this book more had I read the two previous books first. There are enough references back to the events of those books that I was able to follow along, but this really is not a standalone novel. It is inextricably linked to its predecessors, so I would advise potential readers to either start with those first two novels of the trilogy or at least be prepared for certain things to happen and then make sense later because they get explained by pre-Worm events. I suspect the author will not be too displeased with my suggesting that you read all three of the books. 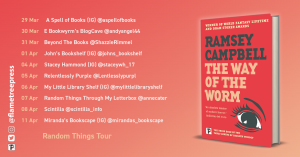 Our thanks to Anne Cater of Random Things Blog Tours for our copy of The Way of the Worm, given solely in exchange for our honest review as part of this blog tour. The opinions here are solely those of Scintilla. For other perspectives on this book, check out the other bloggers on this tour.

One thought on “Blog Tour: The Way of the Worm, Ramsey Campbell”