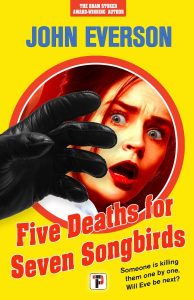 Mysteries generally follow certain formulas. One is the brilliant detective, following clues until they capture the killer. Another, possibly more often seen in movies and TV, is almost the opposite: a potential victim somehow manages to remain alive while the killer relentlessly stalks them.

Five Deaths for Seven Songbirds falls definitely within the latter category. Eve has arrived in Ghent, Belgium to study music. A talented and dedicated pianist, Eve is excited that this world-famous school accepted her all the way from New York. That excitement pales a bit when another student is murdered just before she arrives. The woman had been practicing late in the evening when she was strangled with a piano wire.

Still, as the semester begins Eve settles in. She gets along well with her roommate, is very excited to have caught the attention of an incredible professor, and has been invited to try out for the school’s premier jazz ensemble, the Songbirds.

It seems their previous pianist had been recently murdered.

Security is tightened around the school. Police officers patrol the campus. The Songbirds prepare for their first concert. Eve begins dating Richard, a sax player in the group. The professor has asked her to apply for a prestigious scholarship. But then, there is another murder. Another Songbird, who was watching Eve after her drink was spiked.

The Songbirds are not a large group, but they are clearly the target of a violent killer. Two more murders follow in succession, each of them Songbirds, each of them potential rivals to Eve. The police seem to think she is involved, she wonders who she can trust, and the killer finally turns their attention toward her.

John Everson has put together a twisty plot where the horror rises to a boil and then is turned up some more. There are several potential suspects right up to the end, and although I can’t say it was a surprise when the culprit was revealed, it certainly would not have been a surprise had I been wrong and it was someone else. Everson lets the suspense build as Eve begins to trust, then suspect, some of the people closest to her.

Although not a major storyline, Everson includes some musings on the role of art versus the artist. Can we enjoy art knowing that the artist was an awful person? If an author has engaged in abusive behavior, does that disqualify their books from our collections? If a musician was a racist, can we enjoy their operas? If a painter or photographer took advantage of models, is their art now verboten? If an actor holds repellant views as a person, are their roles no longer enjoyable?

Ultimately these become very personal questions. I think it is unfair to assume that any single person’s position is the only proper one. Everson’s characters hold their views. They may or may not reflect the author’s own perspective. I may or may not agree with those choices. Isn’t that part of the beauty and subjectivity and power of art? What it says to me is likely not what it says to you. I bring my history, my trauma, my joy, my perspectives into every play I watch, every performance I attend, every art gallery I visit, every book I read. Once the artist releases their work, it takes on a life of its own. How distinct the work’s life is from its creator is for each of us to decide for ourselves.

This book is at times chilling, at times exciting, and suspenseful from beginning to end. Eve may be a target, but she is no femme fatale. Like any New Yorker, she may get knocked down but she will come back swinging. 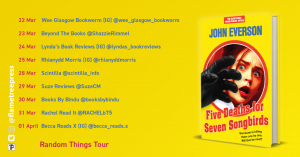 Our thanks to Anne Cater of Random Things Blog Tours for our copy of Five Deaths for Seven Songbirds, given so we could provide an honest review as part of the blog tour for this book. The opinions here are solely those of Scintilla. For other perspectives, check out the other bloggers on this tour.