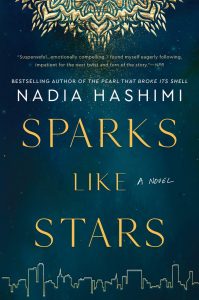 I feel like we could just skip to the end in this review: buy this book! You will love it. Of course, that would be cheating, so we’ll start at the beginning.

In the spring of 1978, Sitara was a young girl living in Kabul, Afghanistan. Her father is an adviser to the president. Afghanistan then was incredibly different than what it is now. It was far from idyllic. But it was not the violent country full of extremist leaders that we’ve seen over the past many decades. At that time it was actually a desirable posting for diplomats: exotic, urbane, even comfortable.

Sitara’s family is staying temporarily at the presidential palace. There are some worrying things happening in the country so the president has asked his advisers to remain close. None of them realize just how worried they should be. One night, a coup takes place and the president and his family are killed. Sitara watches her own father, mother, and baby brother gunned down in front of her. She is then captured by one of the soldiers, a man who used to guard her family, and taken by force from the palace.

Later, Sitara is dropped off with a U.S. embassy diplomat. By then she is deeply damaged. Her family killed in front of her, herself injured in the aftermath and feverish from infection, she finds it hard to trust and hard to hope. The diplomat, a young woman whose mother is visiting at the time, takes care of Sitara and slowly the woman and her mother win the trust of the little girl. The damage is still there, but it’s a start.

The women are able to get Sitara to the U.S. by using the birth certificate of Sitara’s older sister. Born in the US when their parents were studying in Oklahoma, she died soon after they returned to Afghanistan. Sitara takes her sister’s name and birthdate, and so becomes US citizen Aryana. The diplomat, Antonia Shephard, adopts her and so Sitara becomes another victim of the coup and Aryana Shepard, American, is born.

Three decades later, Aryana is now Dr. Shephard, oncologist. Practicing in Manhattan, she is shocked when one day her patient is none other than the guard who had taken her from the palace all those years ago. This precipitates an emotional crisis, flooding her mind with ghosts from the past and giving her a mission to fulfill which can hopefully lay those ghosts to rest.

Fundamentally, this is the story of a young woman finding healing from childhood trauma. But that does not begin to capture the scope or the beauty of this novel. Nadia Hashimi pulls from pieces of her own life to bring her character to life. Like her character, Hashimi lived in Kabul before the coup. She also came to America, grew up to be a doctor, and was doing her residency in Manhattan during the 9/11 attacks. It is not at all an autobiographical novel, but the author writes what she knows, and writes it exquisitely.

I was compulsively drawn into this story. I tracked with the emotions the little girl and later the grown woman experienced. Every person feels echoes from their past. We are all shaped by things we had no control over. Being close in age to the character, I remembered the 1978 coup (although my experience of it as an American was not at all comparable to being there!). I of course remember 9/11. I was even in a production of Oklahoma, a musical which features in the book. 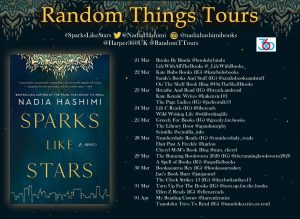 Our thanks to Anne Cater of Random Things Blog Tours for our copy of Sparks Like Stars, provided so we could participate in this blog tour. The opinions here are solely those of Scintilla. For other perspectives on this book, check out the other bloggers on this tour.

One thought on “Blog Tour: Sparks Like Stars, Nadia Hashimi”