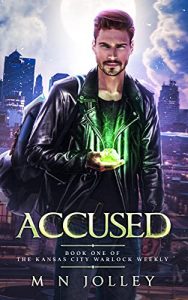 Levi swears he did not kill her. And if you can’t trust the guy who is covered in her blood, who found the body and called it in, who left a mountain of forensic evidence behind in her home and then fled from the police, who can you trust?

Levi (pronounced like “Chevy”) is a journalist for the magical community of Kansas City. See a bridge troll? Call Levi. Have plans for the solstice? Call Levi. Afraid you are going to be murdered by a magical user because you have learned too much about a secret thing? Call someone else. Levi is the chief reporter for the KC Warlock Weekly. He is also the editor, publisher, and sole employee of this start-up paper. He does not have time to solve a murder. He doesn’t even have time to commit a murder.

Quite rudely, since he is on the hook for the latter he has to take time for the former.

The Council, overseers of the use of magic, have sent Counselors to investigate. They quickly lock on to their suspect, one erstwhile reporter. So while fleeing around Kansas City, Levi must escape the counselors, solve the murder, finish the week’s newspaper, and if possible have a date with Ben. Their first date.

Initiating Ben into the world of magic, and fleeing counselors and a vampire and a troll probably qualifies as a memorable first date.

M.N. Jolley has written a sometimes hilarious, constantly sarcastic, and very clever book about a misfit non-magician dedicated to chronicling the magical world for magicians. Levy is not a practitioner, although he can activate charms and spells as well as the next mere mortal. He just found out about the magical world accidentally, decided to learn more, and then put his journalism skills to use for a community that did not have a newspaper. It’s not a great way to make a living, but it does keep one busy.

Levi is self-deprecating, sarcastic, and much smarter than he seems. His mouth sometimes gets him into trouble, but even when running for his life he remains a step or two ahead of his pursuers. By the end, which comes altogether too quickly, we recognize that Levi may not be the hero the magical community wants but he might be the hero they need.

Our thanks to The Write Reads Blog Tours for our copy of Accused, the third place finisher in the BBNYA 2021 competition, for our participation in the blog tour celebrating the top finishers for this award. The opinions here are those of Scintilla. For other perspectives, check out the other bloggers on this tour.