Book Review: The Land of Twydell and the Dragon Egg, Tales of Avalon Book 2, Daisy Bourne 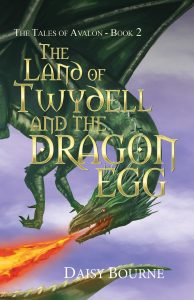 Fantasy: The Land of Twydell and the Dragon Egg, Tales of Avalon Book 2, Daisy Bourne

We all know we live in a dangerous world. If we did not know it before, two years of a deadly pandemic and now the war in Ukraine have driven it home. Sometimes, it’s good to escape from the news of the day with something much more relaxing, say, a children’s fantasy.

I’ve got a suggestion.

Daisy Bourne’s series Tales of Avalon is written for children who have recently moved beyond picture books and are ready for chapter books. In that regard it reminds me of the beloved Magic Treehouse series. Bourne asks the question that many fans of King Arthur have asked: what happened next?

In the Tales of Avalon, Merlin and Arthur have left our world and gone into another dimension. There they have set up a new kingdom, Avalon. When Avalon is threatened by raiders from across the seas, Merlin sets out for the neighboring kingdom of Twydell hoping to find some allies.

Twydell is dealing with problems of their own. A dragon has begun attacking the city. The dragons have long lived in the nearby mountains and although they were never particularly friendly toward the humans, they were never unfriendly. Usually the interactions between the species were cordial. The dragons would sometimes even heat the lake where the locals liked to swim, apparently just to be good neighbors.

Now, though, houses lay in ruins and residents are fleeing. Something has upset the dragon, and he is making the town pay.

Merlin offers to parlay with the dragons and find out the reason for their recent hostility. He discovers that someone has stolen their egg. Dragons typically only lay one egg in their lifetimes (which grownups will realize is not an ecologically sustainable reproductive rate, but this is a kids’ book). The loss of their egg is devastating and they are convinced one of the humans has stolen it. Merlin is not so sure and offers to look for the egg.

Kids will love the charming fantasy world Daisy Bourne has created. Filled with talking creatures, magical humans, and brave warriors (both male and female), it is easy to read and fun to explore. The dangers of the world are not too dangerous, the magic of the world is not too dark, and the delight of the world is just beginning. This is not epic fantasy of the George R.R. Martin or J.R.R. Tolkien sort. It is lighter, gentler, meant for kids but just what the doctor ordered for this grown-up kid who is tired of the dark world he calls home. 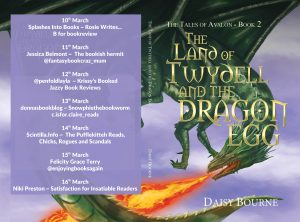 Our thanks to Rachel Gilbey of Rachel’s Random Resources for our copy of The Land of Twydell and the Dragon Egg, given for our participation in this blog tour. The opinions here are solely those of Scintilla. For other perspectives on this book, check out the other bloggers on this tour.

Book Review: The Land of Twydell and the Dragon Egg, Tales of Avalon Book 2, Daisy Bourne

2 thoughts on “Blog Tour: The Land of Twydell and the Dragon Egg, Daisy Bourne”